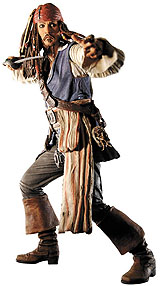 After I wrote my article for MovieScope on piracy, I came to a simple conclusion.

Very few of us want piracy. Most of us want to play fair, pay fair prices, get fair access, and feel the creators get fair pay for their work. Piracy is a symptom of the near catastrophic breakdown of the current distribution models.

People turn to piracy as current content is too hard to get and too expensive (so i's £18 for a DVD and wait a week for delivery, or free on the internet in just 10 minutes). They also feel forced into certain distribution channels (‘I don’t want to go to the cinema tonight, let’s stay in and download it instead’).Don't get me wrong. I DO NOT condone piracy, and at it's worst, it is part of organised crime.

But, arguing against this on moral or even legal grounds is a waste of time. It’s not going to change. We cannot enforce, stamp out, arrest, cajole, threaten… this situation.

More importantly, taking that stance also clouds the vision – piracy is just meeting consumer demands. If we have not done so yet, we need to wake up to these changes, embrace them, and engineer new models for success using tools and chanels that pirates use, but finding ways to leverage it into a business transaction.

If business were to see piracy more like a competitor than a ‘thief that funds terrorism and will bring down civilization as we know it…’ I think we would all be closer to a solution that actually stamps out piracy.

Consumers demand what piracy can offer (immediate access, high quality, compatibility on most devices, cost effective and cheap). And plenty of studies show that people will pay for it too. It’s not the ‘free or cheap’ part of piracy that makes it work so well, it’s that immediate access to everything, and on almost any device. Though I think most people would agree that a great deal of stuff is simply too expensive and needs to become more competitive.

It is clear that a revolution is needed, and I believe its happening right now.

Off the back of that article, I got emailed a fascinating list from a film maker called Ted Hope – here’s how he describes himself…

I am a filmmaker, living in New York City. ADVENTURELAND — which I was one of the producers of — opened April 3rd nationwide. I have made a lot of other films and hope to make a whole lot more… but it is quite the changing world out there, and we all need to come up with some new ways of doing things.

I started reading his long list and started nodding in agreement with almost everything… Here are the first 20 of his points… (you can read his complete list on his blog here – the comments make fascinating reading too).

•  Too many leisure options for film to compete without further enhancing the theatrical and cinematic experience.

•  Too many "specialized" films opening to allow such films to gain word of mouth and audience's attention.

•  Too many films available and being distributed to allow films to stay in one theater for very long, making it more difficult to develop a word of mouth audience.

•  Lack of access — outside of NYC & LA –to films when they are at their highest media awareness (encourages bootlegging, limits appeal by reducing timeliness).

•  Distrib's abandonment (and lack of development) of community-building marketing approaches for specialized releases (which reduces appeal for a group activity i.e. the theatrical experience).

•  HP&W fringe levels at too high a level to allow low-bud production to benefit from know how and talent of union labor.

•  Lack of media literacy/education programs that help audience to recognize they need to begin to chose what they see vs. just impulse buy.

•  Collapse of US acquisition market requires reduced budgets for filmmakers, and thus resulting in limiting content.

•  Credit crunch has reduced ability to use debt financing for film investment.

•  No new business model for internet exploitation at a level that can justify reasonable film budgets.

•  Emphasis on single pictures for filmmakers vs. ongoing conversation with fans has lead to a neglect of content that helps audiences bridge gaps between films and that would prevent each new film to be a reinvention of the wheel for audience building.

And again, here is the whole list on Ted’s blog…

6 Responses to Vive la Révolution! Things have GOT TO CHANGE!