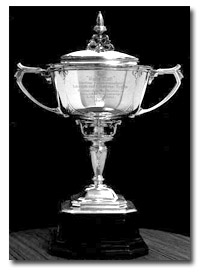 I got an email yesterday from fellow film maker Jim Webber who had made a short film, which won an award at the IAC awards. After looking closely at the trophy, he noticed that in 1989, someone called Chris Jones had also won it for a film called ‘The Thing From Beneath The Bed’, and had emailed to ask if that was in fact me.

Yes! It is! And what a blast from the past! This whopping great trophy, formerly known as ‘The Daily Mail Challenge Trophy’ was presented to me back in ’89, at BAFTA, by John Nettles of ‘Bergerac’ for my ultra low budget short (it cost £5) ‘The Thing From Beneath The Bed’. The trophy, more like a football league cup than a film award, sat on my mums piano for a whole year before it was engraved for the winner in 1990 and passed on to them. There is a link to the awards page here.

This short film was very important to my career as it won many awards and opened many doors. It was so pivotal in my early successes that I actually built it into the online ‘Gone Fishing – Making The World Class Short Film Workshop’ as an example of a film that could open doors and launch a career. The film itself is very low tech and is entirely the POV of a small gremlin like creature while it scurries around a home in the middle of the night. It’s laugh out loud funny, partly because it is so low tech, but also because of the sound effects – it has a charm that most people find irresistible, especially kids who respond very favourably to it.

‘The Thing…’ illustrates how a small project can gain momentum and open doors – the critical thing is to recognise that open door and to pass through it. I knew it had gained momentum when I got a letter from Prince Charles, saying how William and Harry found it very entertaining, and offered his assistance to us ‘budding film makers’. Extraordinary. This is partly what the career development section of the online workshop revolves around.

So thanks Jim, for re-connecting me with this amazing and bombastic trophy!

The power of disconnecting from reality to reconnect with the dream
How I decided to make one film, then chose to make another
The London Screenwriters’ Festival to receive £42,015 from second round of the Government’...
TEDxEaling... ideas worth spreading
So we got another email from Oscars.org…
Morpheus... 'Do you think it's air you breathing now?' Choose your reality with open eyes ...
Editing with Womble MPEG Video Wizard DVD
Disaster Movie 2012 is a jaw dropper!