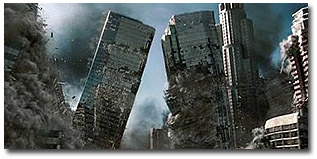 When I was at the PGA conference in LA a few weeks ago, I met with the visual effects team who were responsible for Roland Emmerich’s new global disaster epic ‘2012’. At the conference they gave a very entertaining and informative seminar on the visual effects for the film, and how they did some of them, which culminated in a sneak peek at the new movie. Indeed, Emmerich’s quote of ‘Too much is not enough…’ really did ring true.

I just found out that the trailer for 2012 is now on Apple’s trailer site and watched it yesterday. Blimey! If it can be destroyed, it seems they WILL destroy it! I mean this is destruction on a Biblical epic scale. Looks like a very entertaining slice of nonsense and I am looking forward very much to seeing it. If you have not seen the trailer yet, check it out here.

On another note, I spent all of yesterday with producer Judy Goldberg, sat at the back of the studios, planning and scheming the next project(s). Nothing to announce JUST yet, but the wheels are now in motion. Watch this space.

It’s only fitting that it’s American Independence Day
Foster / Hollywood Update
How To Write For Hollywood And Live In The UK: Podcast with Stuart Hazeldine
Exclusive Interview with Christopher Nolan and Emma Thomas from our Guerilla Film Makers A...
12 ways to rewrite your British written spec script so it sells in Hollywood
Blast From The Past! The Thing From Beneath The Bed
Movie Maker Magazine Arrives With A Suprise