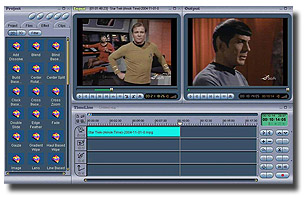 For some time now I have had a stack of DVD’s piling up on my desk, disks with clips on them that I need to rip and edit, usually from stuff from other festivals where I did some PR or the like. It’s just a big archiving job really. But getting the data of the DVD, edited and then back onto a DVD without re-encoding, therefore losing quality, has always been a problem. I have done it before in Avid abut there was all manner of frustrating ‘field inversion’ issues and it took forever to convert into editable Avid media. Yikes.

Doing some research I just came across a very small and lightweight editor called Womble MPEG Video Wizard DVD. It’s main claim that interested me was that it could edit MPG (DVD) files natively, that is without converting to another format first (which takes ages and reduces quality). There are several of these kinds of programs on the web and I have tried most, usually finding them so ‘consumer centric’ as to make them almost useless for me (they are used for people who have hard drive video recorders and want to save to DVD, stuff that they have recorded, but also edit out the commercials).

It turns out that Womble is a terrific little editor. Sure it’s never going to replace Avid, FCP or even Premiere, but its fast, it’s intuitive and so far has worked flawlessly with NO re-encoding at all. There is a trail version on their site which you can check out here – it costs about £30. There’s lots I would change about this programme, but I can’t complain as it does work flawlessly and is super cheap. Check it out.

Top Ten Things To Consider When Mixing The Sound For Your Film In A Professional Dubbing T...
Sales Delivery Schedule Workshop a HUGE success!
Blast From The Past! The Thing From Beneath The Bed