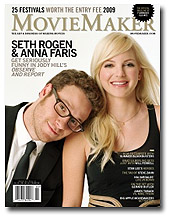 Today my MovieMaker magazine arrived from the states, an indie film rag that I subscribe to. Flicking through it, I noticed there was a roundup of film festivals, and saw that the Sedona Film Festival was included. You may know that we attended the Sedona Film Festival this year with Gone Fishing and it was a stand out event which we video blogged – you can see the original video and post here. I was even more surprised when I read the article… Here’s how it started!

‘As British moviemaker Chris Jones noted during his acceptance speech after winning the Best Foreign Short Film Award for Gone Fishing at the Sedona International Film Festival: “If Sedona were a small town in England, festival director Patrick Schweiss would be given a knighthood!”’

The article goes on to speak at length about the extraordinary experience that the SIFF manages to deliver. Something I agree with completely.

If you have made a film and get a chance, submit to SIFF and if you do get in, you won’t be disappointed.