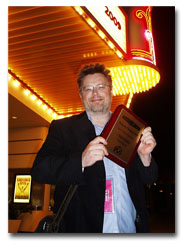 Day 2 of the Producers Guild Of America Conference had many highlights, meeting Clint Eastwood, seeing some of the original Star Wars films ‘dimensionalised’ into 3D, watching a side by side test of all the top digital cinema cameras…. But all the will have to wait as in the evening was the awards…

And yes, WE WON! I didn’t know at the time but producer Gale Anne Hurd (Terminator, Aliens, Incredible Hulk) was sat at the back and came out to present the awards. When our name was read out I nearly passed out as I was now about to share a stage with the producer of one of the most influential films of my life, ‘Aliens’. I am afraid I babbled on stage, and managed to put my foot in my mouth several times, but hey!

The award actually goes to both Ivan and myself and includes some free time at a sound mixing studio, a copy of Final Cut Pro, but best of all, a mentoring lunch (and hopefully a longer term relationship) with a major Hollywood producer. AWESOME!

At the after awards party, Gale came up to me and told me how much she enjoyed the film. I can’t remember exactly what she said but it was extremely complimentary. Rachel Klein, one of the big cheeses at the PGA, also told me that the judge’s decision was unanimous. Awesome.

Right. Now I have to capitalise on this win. I am working with Andy my manager to set meetings up this week, and penning a press release right now.

50 Kisses HUGE Box Office Success... The numbers are in!
Meet The Nativity Wins 'Best Festival' Film at 22nd Jerusalem Awards at BAFTA
Video Postcard from the 50 Kisses Premiere
The London Screenwriters’ Festival to receive £42,015 from second round of the Government’...
Producers Guild Of America Conference Day 1
PGA Conference Day 2

Leave a Reply to Karen Click here to cancel reply.