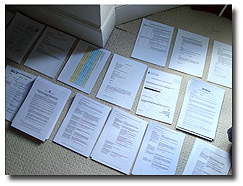 I am doing the final prep for tomorrows Delivering Your Film Seminar and I am delighted that we will have a packed house. I was afraid that as this is a stage at the end of production, most people would say ‘we will deal with that when we get to it…’ But it seems there is a lot of interest in this vital step between film maker and audience. People are really thinking forward in order to fix problems before theye even occur.

I have been wearing out my printer as I wanted to actually hand every delegate a physical example of every document (just a few in the pic!), legal statement and contract as an example – even the eleven page Errors and Omissions Policy, five page Dolby contract and loads of statements to be signed by various cast, crew and producers (even though it was not advertised, I am also giving delegates a CD of the relevant blank forms so they can just fill them out when they get to production).

Expert in this area, Sara Janazs, has been helping out with the real nitty gritty detail, and on the phone yesterday, she told me how, even on bigger films, the film makers are amazed at how much stuff is required by the sales agents. And having just closed a TV sale for ‘Gone Fishing’, I can tell you that you even need to supply some of this stuff for a short film too.

I am really looking forward to his new workshop now. It’s going to be a long day of mega detail though. I hope the delegates bring several notebooks!

If you want to come, there are still a few places left – you can sign up here.

Selling your movie direct on DVD...
What’s the one thing missing from your financing arsenal?
A Masterclass In Microbudget Film Making - Interview with 'Paranormal Activity' writer and...
Making Feature Films For No Money: How I Made My “★★★★ Intense and Tender Psychological Th...
Should you distribute your short on DVD and BluRay? Guest blog from Danny Lacey: 10 things...
The Devil Is In The Detail…
Sales Delivery Schedule Workshop a HUGE success!