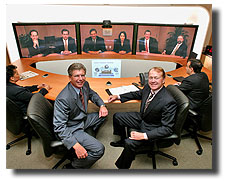 Over the last few days I have been working with some corporate clients on a very ambitious film. I can’t say what and who, but I can tell you of a few exciting things I have experienced. First off is 3D on a TV (we may be making a film in 3D). I saw a demo on a 3DTV at the PGA conference a month or so back and was blown away. I had heard rumours and myths of a 3D TV that needed NO glasses. Sounded like the Loch Ness Monster or Yeti to me. But then I saw one last week! WOW! Yes 3D on a TV, moving images, no glasses. OK, so it has some limitations. First off, it uses technology similar to those 3D posters and cards we have all seen over the years. So the resolution is low, and if you move, so the image shifts uncomfortably. Also, the image only goes backward and ‘behind’ the screen and does not pop out at you. It’s a show stopper for sure though. The first time you see it, there is a moment of awe. But you would NEVER watch Lord Of The Rings in 3D on it.

The other technology I used was a telepresence video conferencing suite, designed by Cisco. I had heard that these systems were amazing, and seen them in TV shows like 24, when Jack Bauer needed to speak to the president. All very cool. But I was completely blown away when I used it. These guys really thought it out and delivered a world class piece of technology.

Three cameras film one side of the room and feed it to the ‘other room’, and vice versa. What impressed me most was just how useable it was – high resolution, massive images, no lag in time, clear sound – it really felt like the guys were just across the table form me. There is a link here from Youtube which will give you a taste of it in action. Awesome. Truly awesome.

Which email service should YOU use to stay in touch with your group?
Distributing The Digital Feature With Technology Today! A Proven Model?
The All New Digital Guerilla Film Makers Pocket Book!