By Chris Jones on July 22, 2009 in Guerilla Film Makers Handbooks 1 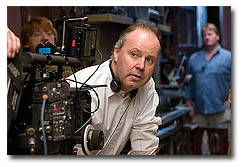 Last night I went to see the new Harry Potter film, and personally, I thought it was terrific. It felt like The Empire Strikes Back of the HP series, finally grown up, with real consequence to action, and difficult choices being made by characters. Director David Yates and his team did a terrific job. Some people have complained it was long, but I loved every minute of it.

I have two links to the HP franchise, first off and most obvious is Devon Murray (who plays Seamus in HP) starred in ‘Gone Fishing’. But I also know director David Yates, from way back when – at the same time I was making ‘Urban Ghost Story’ at Ealing Studios, he was also making an indie feature called ‘The Titchborne Claimant’ and we got to know each other.

I interviewed David for the last Guerilla Film Makers Handbook, before he had directed his first HP film (but was hired and in prep). It makes for fascinating reading – you can download a PDF here.

All in, I can’t wait for the next two instalments of the Harry Potter franchise…

Edgar Wright Genesis: the Guerilla Filmmakers Handbook archive interview from 2005
Welcome to MY 'Guerilla Film Makers Handbook'.... circa 1989! The making of 'The Evil Dead...
Get a ton of filmmaking tips, tricks and articles every day
Get a job in Hollywood... detailed insight into the dream factory
Catherine Hardwicke Genesis: How she wrote and directed her first film that led to 'Twilig...
How to run your own micro theatrical release in London: Case Study

One Response to David Yates delivers on Harry Potter