During the Cannes Film Market, I recorded an audio podcast with Derrin Rammage from Maxim Media, an Arizona based sales company that specialises in ultra low budget horror films – and when I mean ultra low budget, I mean it, kind of around $20k! He always has a huge catalogue of titles that to my eye, veer from the ridiculous, through to extremely accomplished for the resources at hand.

I recorded the podcast as he is a ‘real’ sales agent who can sell a horror movie made for £10k. The question is, do you have 8 mates, a camera, a cabin and £10k? If you do, maybe you have a m,ovie too!?

You can listen to the podcast below… 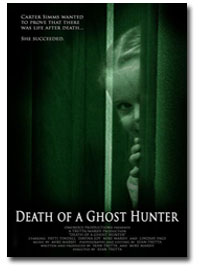 During the podcast, Derrin refers to one title called ‘Death Of A Ghost Hunter’ and you can watch that trailer on YouTube here.

Derrin really is a colourful character and his films sometimes defy belief, but I see him in the Palais every Cannes Film Market, and it can’t be cheap to attend the market and run a booth for a week, so he must be doing some thing right!

Who is in your crew? A guide to low budget film crews
Camaraderie, focus and chemical addiction - are you an addict?
UK Indie Film Success Strategy: Tightly resourced productions with dramatic but contained ...
Day Of The Flowers: Ten Tips for shooting in the heat and humidity abroad
Listen to the Filmmakers Podcast and get film and screenwriting tips
The BBC College Of Production podcast on 'budget film making'
Top ten film festival submission tips
'Gone Fishing' speaks to 'Childrens BBC'

One Response to Do you have £10k to make a horror movie?