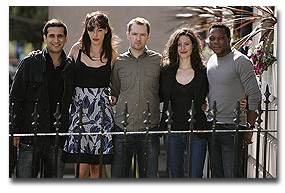 Last year, film maker friend and writer, Stuart Hazeldine, made his debut feature. You may recall he was good enough to come and speak to us all at the studios, about his experiences in Hollywood as a writer (recently, he wrote Knowing with Nic Cage) – you can listen to the podcast here.  So his feature is called EXAM and it premiered last week at Edinburgh, and by all accounts, it was a roaring success. (pic right is Stuart in the centre surrounded by his cast at Edinburgh).

I got involved to help out where I could with production as they were shooting 35mm and following almost exactly the same post production route as Gone Fishing. Stuart and Producer Gareth were gracious enough to give me an Associate Producer credit for my contribution, which I was more than happy to accept, as I know that EXAM is going to win a bunch of festivals, as well as I am sure, have a successful commercial run. Of course a credit like this all adds to the IMBD presence (and if you havent yet voted for Gone Fishing, you can do on this link).

So here’s the plot of EXAM…

Eight talented candidates have reached the final stage of selection to join the ranks of a mysterious and powerful corporation. Entering a windowless room, an Invigilator gives them eighty minutes to answer one simple question. He outlines three rules they must obey or be disqualified: don’t talk to him or the armed guard by the door, don’t spoil their papers and don’t leave the room. He starts the clock and leaves.

The candidates turn over their question papers, only to find… they’re completely blank. After the initial confusion has subsided, the candidates soon discover they’re permitted to talk to each other, and they agree to cooperate in order to decipher the question: then they can compete to answer it. Soon enough, the candidates begin to uncover each other’s background, prejudices and hidden agendas.

Tensions rise as the clock steadily descends towards zero and one candidate after the other is expelled for breaking the rules. In the course of this exam each candidate must decide how far they are willing to go to win the ultimate job…

There are reviews appearing on the web now, and they have a Facebook page here… Go ahead and join and support a great British movie that has real bite! Here's one from Empire

'A fascinating battle of wits and hits as the candidates gradually reveal their true natures and the power seesaws around the room ­ a simple setting made surprisingly involving by some ingenious ideas I can¹t reveal, a brisk pace, smart editing and some strong performances ­ particularly from Pollyanna McIntosh and Luke Mably.  I suspect the film itself will reward repeated viewing, despite its confined setting, rather like Vincenzo Natali¹s Cube did in 1997. Call it The Apprentice Cubed ­ a smart genre thriller of a kind too little seen from the UK. Hazeldine; you¹re hired'
NEV PIERCE – EMPIRE MAGAZINE

So well done to the whole cast and crew, and of course Stuart, Gareth and Sparky!

The BBC College Of Production podcast on 'budget film making'
How To Write For Hollywood And Live In The UK: Podcast with Stuart Hazeldine
EXAM: Meet the filmmakers, read the screenplay...
Meet Jonathan Newman, writer and director of ‘Swinging With The Finkels’, inspiring Q&...
Oscar winning Producer Gareth Unwin and Oscar winning writer David Seidler: The Kings Spee...
Movie Maker Magazine Arrives With A Suprise
Amazing Email from LA…