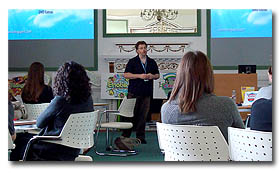 The last week has been a little hectic as I have been pursuing a book from a writer to develop into a feature film – can’t say what just yet, but we hope to close a deal very soon and then I can announce it. And so I have been knee deep in reading, negotiating and other such shenanigans. But today was different, and welcome change of gear.

Earlier in the week I was contacted by someone from the BBC, from CBBC (Childrens BBC) to be precise. They were organising a team building day for their producers, and asked me if I would come and talk to them for an hour about my experiences and specifically ‘Gone Fishing’… ‘I can see you are a person who rises to a challenge and has a ‘can do’ attitude… tell us all about that’ is what the glamorous Tamara Howe, Chief Operating Officer at BBC Children's said to me. I of course accepted the challenge, but when I put down the phone, I realised I had just commited to standing up in front of an audience of very experienced BBC TV producers, and I didn’t want to sound like I was telling them how to do their own jobs! This could all go horribly wrong…

One of the reasons for this event is that CBBC is moving from London up to Salford, and there were many anxious folk in the department, unsure of which way to go – stay in London and find new work? Move to Salford, with all the upheaval that would follow? I was briefed on this situation… like I wasn’t nervous enough already!

Thankfully, the event went very smoothly. It was great to share my experiences on ‘Gone Fishing’ with what turned out to be a room entirely filled with women (aside from myself and one other BBC staffer!) At the end, one listener came forward and shared with me how much the film touched her, and how much the stories of how the film was made deeply resonated with her, and she urged me to seek other such speaking engagements. It’s certainly something I think I will consider as frankly, it’s so much fun!

How one filmmaker secured a UK distribution deal for their £30k horror movie WITH advance!...
Gone Fishing on Korean Fishing TV channel!
Stunt Co-ordinator gets onboard
The power of disconnecting from reality to reconnect with the dream
Meet Jonathan Newman, writer and director of ‘Swinging With The Finkels’, inspiring Q&...
The four principles every creative needs to use when asking for help for their project: Wh...

Do you have £10k to make a horror movie?
Reflections from the journey…