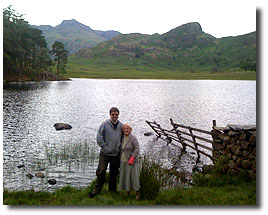 When I am at film festivals, I am often asked what was the inspiration for ‘Gone Fishing’. There are lot’s of different answers to that question, but one big component was the death of my father a year or so before we made the film. While the story of ‘Gone Fishing’ is not directly about the ‘death of a father’, more about ‘the death of a loved one’, it’s clearly bouncing around there in the subconscious. Those of you who have seen it will know that it’s this part of the story that really resonates with audiences, while the story of ‘Goliath, the biggest pike ever caught’, keeps us smiling thorough it.

The picture here was taken yesterday at a remote part of the Lake District called Blea Tarn. It’s where my dad wanted his ashes buried – every so often my mum and I go up to Blea Tarn to the spot where we buried his ashes, and we always laugh on the way because it really could not be any more remote!

The tarn itself is a wonderful place and we hoped to have filmed Gone Fishing there, but it soon became a practical and logistical impossibility, as well as a political problem with regard to disturbing the natural wildlife with a film crew. So we ended up shooting at Bury Hills Fisheries, which really did fill in amazingly. Those of you who follow the blog will remember we added some visual effects to create the mountainscapes we needed in the background – I wrote about it on the blog here (where you can look at the before and after of the effect).

When I made my initial request for support to raise the budget for 'Gone Fishing', I even included Blea Tarn in the document as I wanted to keep it as personal as possible (how this document worked out is explained in our online workshop, but needless to say, it worked as we raised the budget).

This was about the very first weekend off I have had in what feels like a couple of years. I didn’t even take a computer with me, though I must confess I did have my iPhone for occasional emails and twitters. Still, it was hugely relaxing and a feel so much better for just a short break.

The Top FIVE Steps To Getting Your Film Funded
And it was all going so well... Or was it? Filmmakers, Screenwriters, Creatives... Are you...
Gone Fishing Proposal - Final Proofs Before Printing
Final Feedback from 10 year old Guerilla Filmmaker Holly Jacobson!
What is the most important thing that a powerful storyteller MUST do?
Stunning Wingsuit Documentary: Split Of A Second
How to market your film, a free podcast with PR expert Sheri Candler!
Top ten film festival submission tips