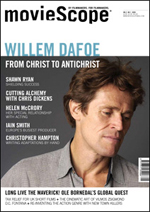 Leafing through this months Moviescope Magazine (in which I have an article), I noticed an article by Stephen Follows. I met Stephen for the first time a few years ago and I was impressed with his energy and enthusiasm – he seems to be capable of speech at about 150% normal human speed. Lord only knows how his brain doesn’t fry. Anyway. He spotted an opportunity in the UK Tax credit which is this…

This means you can conceivably make a short film and then put it in for the UK Tax credit, which is 20% of your budget spend – that’s right, the government will give you 20% of your budget back, they just send you a cheque! Now hang on there, there are a lot of hoops and caveats. This isn’t a simple freebie.

First off you must spend the money, so no deferred fees and the like. Only real cash spend

Second, you will need an accountant at some point.

Third the film MUST be intended for UK theatrical release, not just DVD, but the cinema.

Fourth, it must pass the UK cultural test.

And then there are bunch more things you need to do.

All of these points mean that micro budget films really just don’t cut it, you need to spend a fair whack of cash to make the whole venture viable. Over the coming months some test cases will start to appear and we can all see how it evolves. But potentially, it’s VERY interesting as it represents some real cash coming back to the film makers.

You can read an extended article on Stephens website here…

Six Lessons I Learned Making My First Feature
I am supporting 'Clowning Around', are you?
A Further £500 raised!
The Three Pillars Of Successful Low Budget Horror Film Production
Gone Fishing Update
Everything is negotiable, my Total Film article part 1