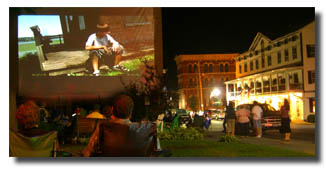 We have just won the Ballston Spa Film Festival in New York State, USA… What a way to start Monday Morning! And it gets better, we also won Best Editing and Best Sound!

I am gutted I was unable to attend as it was an open air festival and to see ‘Gone Fishing’ in such an environment would have been a real thrill. Alas.

I am particularly delighted that Eddie Hamilton also won Best Editing. It’s not possible to really over emphasise just how much Eddie contributed to the film (anyone who has watched the online Masterclass online knows how much skill and enthusiasm he brought to the production and then shared with us all in the class), and for him to be recognized in this way is terrific. Job well done mate!

And then Best Sound too! Ro Heap recorded the location sound, which was terrific, but I suspect the award is really going for sound design, which was all down to the marvelous track laying and editing by Bernard O’Reilly and sound mixing by Andrew Stirk (oringal blog post here on the sound mix). Bernard and Andrew worked for a company called Videosonics, who shut down last year, and they now have their own outfit called The Sound Kitchen UK,  mixing movies – so drop em a line here if you need help with your movie (and there is also a 30 minute interview with Bernard about sound design in the Gone Fishing Masterclass).

Again I am thrilled that these guys have been collectively recognized as the sound on Gone Fishing is critical to that big screen theatrical experience. We all worked very hard to get it sounding like a $50m feature film, and it really does. So thank you guys!

The organizers of the festival dropped me a line last week to see if I could attend, and sadly, I had to say no – but they did send a link to a radio show which featured ‘Gone Fishing’ and you can listen to it here.