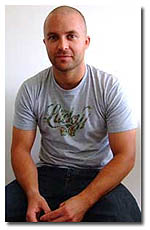 The final interview I did for the Guerilla Film Makers Pocketbook last week was with writer and director of Microwave Brit feature ‘Shifty’, Eran Creevy. Immediately likeable and extremely energetic, it’s not hard to see how Eran has achieved so much in so little time. In only a few years, he has gone from runner to directing commercials, to now directing his first feature ‘Shifty’, which is based loosely on his friends while growing up.

It was hard to get a word in edgeways with him, but I will tell you one of his more revealing stories about his commitment to success and how he got his first break. He had put himself up for running on anything he could get a break on, and as it turned out, that was with Mathew Vaughn’s production company on ‘Stardust’. He was interviewed by an ex marine who clearly ran a tight ship. Part of his job was to keep the cast in tip top shape – and as Eran was a fitness enthusiast, he was asked if he could help train one of the actors… The answer Eran gave was of course, ‘yes…’

‘Then you can pick him up tomorrow, you have a car?’ he was asked.

Eran got the job. The only problem was, Eran didn’t have a car. In fact he didn’t know how to driveor even had a provisional licence. He called a pal and asked if he could be taught to drive by Monday (it was Friday). His friend advised him, ‘don’t be stupid, you will get someone killed… you will have to go back and tell them…’

The thought of going back to apologise to an angry ex marine would scare off most people. But Eran went back in and said ‘I am sorry, I don’t have a driving licence, I can't drive…’ It was like staring down the barrel of a gun as the heavily tattooed ex marine PM said… ‘are you telling me you came in here and lied to me? Just to get the job?’

The ex marine leans forward, the table groaning under the weight of his muscular body…

‘You looked me in the eye and lied?’

Guts, determination and charisma. Eran has it in spades. The complete interview will be in the new Guerilla Film Makers Pocketbook when it hits the shelves later this year.

Congratulations to the 25 Selected Authors in our Father Christmas Bedtime Stories Book
Joe Eszterhas’ ‘The Devil’s Guide to Hollywood: The Screenwriter as God’
Can you write a 500 word children's bedtime story for Christmas?
And it was all going so well... Or was it? Filmmakers, Screenwriters, Creatives... Are you...
Exclusive Interview with Christopher Nolan and Emma Thomas from our Guerilla Film Makers A...
Enter… The Black Hole…
Gone Fishing now on BluRay and tips to sell the DVD of your film