Over the journey of ‘Gone Fishing’, several people became regular contributors along the way – one such person is Simon VanDerSpoel in Australia. He initially made a contribution of £50, then I found out he had made his own doc on spitfires (so we did a podcast), and eventually I ended up hanging out with him at the Heart Of Gold Film Festival in Australia, in the town where actually lives!

Simons special interested DVD, ‘Spitfire Guardians’, is about the Australian ground crews during the second world war. Last year I recorded a podcast with him which you can listen to here.

The video above is a great example of how, specifically, special interest DVD can be sold at a significant profit at targeted events. This is a model that all film makers can employ – sure you will never get rich doing it, but it will mean that you make money out of making films and selling them, and you get to meet your audience, growing it for the next DVD that you make. 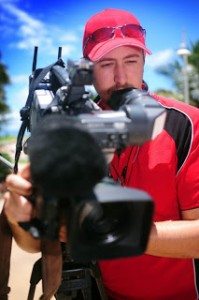 The basic concept is this – make a film about something that you are fascinated by – WW2 Spitfires, Trains, Local History… assuming there are other people who are equally interested in that subject matter, you will be able to sell DVD’s directly to those people. There are lots of precedents for this model working, one big player being Robert Greenwald in the USA who has created a very successful business out of political DVD’s. Of course he also gets the warm and fuzzy feeling that he is also making a difference.

Stunning trilogy of Star Wars documentaries... lose an entire weekend!
Watch extraordinary documentary about the making of arguably the greatest movie ever made:...
The Guerilla Filmmakers Handbooks have a new shiny website
"From One Second To The Next" shocking doc about texting and driving by Werner Herzog
6 Secrets to Getting Cinematic Footage on Your iPhone
Meet Jamie Benning, creator of 'Filmumentaries'. We LOVE him!