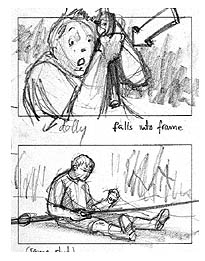 A picture speaks a thousand words… use artwork to help deliver a killer pitch
More Cash and Crewing!
Storyboarding, from idea, to script, to thumbnail, to board...
The phone rang, and from that moment, everything changed... PART 2
Rocketboy Concept Art Gets Investors Excited
Gone Fishing Festival Update
John Truby, script guru comes to town, and we have a GREAT OFFER for you