By Chris Jones on September 3, 2009 in Awards, Festivals, Inspiration 0 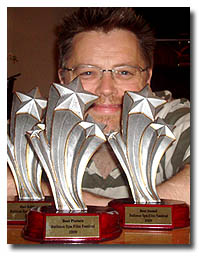 A bunch of awards turned up in the post today, namely the three we won at Ballston Spa a few weeks back. One for Best Picture, one for Best Sound (Bernard O’Reilly) and one for Best Editing (Eddie Hamilton). I will be giving them their awards when I see them next!

I was gutted I could not attend the Ballston Spa festival as it was an outdoor event and it would have been great to see Gone Fishing on the side of a building with the audience sat on deck chairs in the park. One of the big problems facing indie film makers is how to sustain and fund a festival run – it’s expensive to jet set around the world, stay in hotels and all the time you are doing this, you are not making money either. And that, sadly, is why I did not go to Ballston Spa.

Like most indie film makers, I have learned to sleep under rocks, in cars and on sofas, and that meant that the majority of the festival run I have had was cost effective, but there is only so much you can really do to save money. I am working on a corporate job right now (as well as writing a script with Judy Goldberg), and I hope that two week endeavour will buy us many months of freedom so that we can get back to making movies…

How cliché is your script? Can you see your work in these two trailers?
How remarkable is your project?
What's the secret to getting through a huge script on limited resources?
Stephen King and George RR Martin in conversation... Seriously!
John Cleese Podcast Lecture on Creativity and Originality: The 5 factors that you can arra...
Rewrite, rewrite, rewrite…
Heaven and Hell at BAFTA…