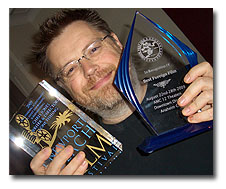 What a bumper day for the FedEx man. I came back from our shoot to find two trophies for ‘Gone Fishing’, waiting patiently at the studios. First was from the Indie Fest USA awards a few weeks back, and second was from the Newport Beach Film Festival in LA where we won Best Screenplay a few months back. The Newport Beach award is solid glass and weights a ton!

And I also found out today that we won ANOTHER award, Best Film at the Spirit Quest Film Festival in Pensylvania over the weekend. Here’s the email I got from Greg, the festival organiser!

Chris – I am pleased to announce that "Gone Fishing" has won the award for Best Narrative Short at the 2009 Spirit Quest Film Festival!

Congratulations! Thank you for making such a wonderful film!

One Response to Awards, Awards and more Awards for ‘Gone Fishing’