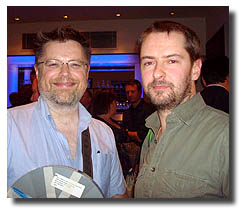 Whenever I have taught my two day Guerilla Film Makers masterclass, one of the things I talk about is having a really amazing premiere. You have worked your guts out for months, probably even years, and you deserve the premiere of a lifetime. I have always hired the Princess Anne Theatre at BAFTA, 195 Piccadilly, for my premieres, and it’s always been an amazing evening. Last week we had a double bill screening at BAFTA of both ‘Gone Fishing’ and also Stuart Hazeldine’s ‘EXAM’ which I Associate Produced last year (pic is me with Stuart on the right – both of us suitably bearded).

Both movies played extremely well, though it was a little bit of ‘light’ and ‘dark’, with Gone Fishing being such a warm, family film, and Stuarts ‘EXAM’ being a dark psycho drama, kind of like ‘the Apprentice goes to hell!’

It was the first time I saw ‘EXAM’ with the final cut, effects, grading and everything completed. And what a movie! I will let you catch up with it in due course (when it comes out later this year, or early next year), but as a teaser, the whole film plays out in a bunker style interview room as candidates take the Exam from hell, and drop like flies… and all in real time…

I have to single out lead man Luke Mably, pulling off an incredible performance – in fact it’s a career defining performance. Extraordinary. 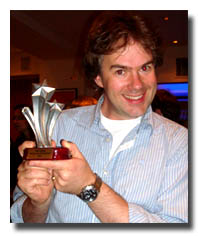 Editor Eddie Hamilton was also there, and so I passed on the award he won for Best Editing at the Ballston Spa film festival. I also met with his co-editor for the upcoming ‘Kick Ass’, John Harris, who just directed ‘Descent 2’ (which they cut down the hall from me at Ealing Studios). What a very nice chap, and also a graduate of Bournemouth Film School where I attended in what feels like a previous life.

All in all a terrific evening and a night to remember.

In fact it made me reminisce about the original ‘Gone Fishing’ world premiere at BAFTA last year – there is a link to that event and video blog here.

I hope you give yourself permission to have an amazing premiere evening – and you know, if you can’t afford it, sell tickets! People will be happy to pay if they know you don’t have the cash. Be unreasonable. Go on!

LA Screenings Video
'Swinging With The Finkels', Inspirational Script to Screen with Jonathan Newman
50 Kisses Final Mastering: Making The DCP Part 1
Awards Arrive In The Post… If only they were made of gold (we could melt them down then…)
I always knew I should be in music