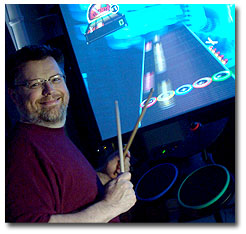 All this week I am on location shooting an ambitious corporate film for a major technology company. The film is going to be showing lots of cool new technology in action, and as such, it’s been my job to get all that kit working for the camera. I have always been a techno-geek, so this job has been lots of fun – but I have to tell you, I have discovered something extraordinary. And yes I know, many of you will have already been there and got the T shirt, but… Guitar Hero on X-Box!

Who would have thought that strumming a guitar or pounding on a drum kit within the confines of game could be SO MUCH FUN! Right now I can hardly type after a gig that included Bon Jovi’s ‘Livin’ on a Prayer’ with an encore of Motorheads ‘Overkill’, complete with never ending cymbal and snare drum pounding, sweat inducing drum solo! And what a workout and stressbuster.

For the film, I have had to check out a number of other more traditional games too, like ‘Burnout’ and ‘Halo’, both of which were a lot of fun, and more like movies when played up on the video projector. But for sheer fun, nothing has come close to Guitar Hero… Right. Pass me my plectrum…

Top ten soundtrack, score and music mistakes made by filmmakers
Why producers WILL NOT READ YOUR SCRIPT - shocking case study from one exec
The Three Pillars Of Successful Low Budget Horror Film Production
Day Of The Flowers: Ten Tips for shooting in the heat and humidity abroad
5 Ways To Get Top Talent Attached To Your Screenplay by JK Amalou
UK Indie Film Success Strategy: Tightly resourced productions with dramatic but contained ...
Heaven and Hell at BAFTA…
Awards, Awards and more Awards for ‘Gone Fishing’