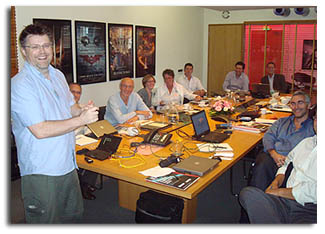 Yesterday I was invited by Kodak to speak to their top motion picture European executives, about what it’s like to be an independent producer in 2009 – reading between the lines, it was really about how Kodak could better reach emerging film makers in the digital age, and tell them about film and why it’s still a great choice of ‘shooting format’. It was quite a privilege to be asked, and wanting to do the best I could, I put together a PowerPoint presentation to arrange my thoughts in advance.

Hosted at the HQ of Cinesite in central London, the presentation evolved into a robust conversation about film, digital and Kodak, and I think everyone got something out of it. Many of the ideas we discussed should, in fairness to Kodak, stay behind those closed board room doors. But I did make a list of ephemeral differences and distinctions between film and video (digital) and I thought I would share some of those thoughts.

First off we discussed all the advantages of digital, which are well know, such as instant access to the rushes, no stock costs and the like. That stuff is all clear. But what about the other stuff, the kind of things you just can’t put into a budget…. Like…

Crews love film
If you can shoot film, generally, you will get a better level of crew, which often begins with the DP – why? Crews love to shoot film. There is a different vibe on set, it’s more exciting, and that also filters through to the actors. When shooting film, everyone knows that each take costs LOTS of money, and so energy levels raise and people nail it in take one, two or three. Typically on digital shoots, energy levels are lower and takes go on and on. A better crew usually means better film.

Actors LOVE film – BIG camera, BETTER performance
Actors KNOW that film is expensive, and so come to set that bit more focussed, a midge more prepared. There is also a good argument that they need an audience, and when the camera IS the audience, the bigger and better that camera, so the bigger and better the performance. Kiefer Sutherland famously said when shooting digital test for 24 said, (paraphrasing) ‘If I am going to give a big performance, I want a big camera…’

The discipline of shooting film creates an onset vibe
Film sets tend to be more disciplined than digital sets.

Less footage in post production
Shooting film will create less material to edit in post – as editor Eddie Hamilton put it – ‘digital shoots can create more material that is poorer in quality’. This extra material can have a significant impact on your post schedules.

It’s hard to destroy film, compared to the delete button
Drop a roll of 35mm and it’s a loud clang. Drop a hard drive and you could destroy a days worth of work. Digital data is more fragile. Many digital productions, at one point or another, loose some material due to operator error.

There was also some discussion around 2 perf 35mm (image right shows open gate 35mm and 2 perf footage below) – a format that shoots twice as much on the same amount of film stock, thereby literally halving the lab and film stock costs on a production (2 perf was famously used to shoot the spaghetti westerns with Clint Eastwood and is ideal for films shoot in the 2.35:1 aspect ratio like we did with 'Gone Fishing'). There are more and more 2 perf cameras appearing and this is a good thing. We had hoped top shoot Gone Fishing on 2 perf but we could not get the cameras back then. I would love to hear from anyone who has shot 2 perf!

Eddie Hamilton turned up as I was wrapping up, and added his own take to conversation.

All in a great event and I enjoyed every minute of it.

Meet Jonathan Newman, writer and director of ‘Swinging With The Finkels’, inspiring Q&...
The phone rang, and from that moment, everything changed... PART 1
What game are you playing and who are you competing against?
How to Kill Your Filmmaking Ego by Mark Jeavons
The power of disconnecting from reality to reconnect with the dream
The next feature film… so close to being announced…
The Asiana Int Film Festival and other fun and games…