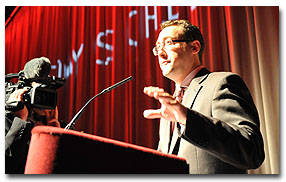 A few weeks back we screened Gone Fishing at BAFTA – this was made possible by another film maker, David Chamberian, who has made a film about bullying called ‘Wednesdays Child’

He has some spare capacity so offered it to us and we ended up having a great industry screening of both Gone Fishing and EXAM. Excellent.

I know David as he took our online Gone Fishing workshop, and applied some of what he learned, to his latest film. He dropped me a lengthy email just now, and here’s what he had to say… 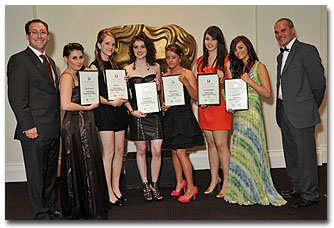 First, I started writing this letter to you after completing an HOUR long radio interview with members of the cast talking about the film we made and the 20 odd print / media stories it’s already received in papers from all around London and the Midlands. So for a short film it’s gotten some nice early exposure.

One of the biggest bonuses has been the involvement of the Princess Diana Anti-Bullying Award which 6 of our cast members received. They won this because they were willing to take the whole anti-bullying theme (and the film) to other schools to raise awareness about the topic. And now, with private funding behind us we get to tour the film around England schools. Yet…  still only a small select group of people have seen the film and I can’t help but to wonder… Is it any good?

In your “Gone Fishing” seminar you said “You will never watch your film for the first time” and for me, truer words have never resonated more clearly.  Not a scene goes by without my critical mind counting every problem with it. However, I’m sure I’m not alone in this film making problem.

So a few lessons and surprises I’ve learned which relate to things you teach about in the “Gone Fishing Seminar” (hereafter GFS) you might be interested in.

“Just because you’ve premiered doesn’t mean the work is over.” I am shocked how many film makers I have found think that it’s just make a film, premiere it, post it on line and then forget about it.  In the GFS half of your time spent talking about the post production work. Yet lots of film makers seem amazed that “I’m still at it.” Is this uncommon do you think? Wouldn’t your future success depend a great deal on how strongly you market after your film is completed?

“Don’t do everything yourself” – For me this wasn’t a lesson but a confirmation in what I strongly believe. Don’t get me wrong, I’m a control freak. Hand on heart, I admit it, own it, live it. However, if I’ve learned anything in working in film and theatre these many years it’s give away every job you can to people that are better at it than you.  But to my surprise, SO many young film makers want to do everything themselves and call it “production quality control.”

“Begin with the end in mind.” The biggest thing I think I took away from GFS was to know what you want to do with your film – your goal, “To make an Oscar Winning Film or at least an Oscar Qualifying Film.” This was clear and concise. Our goal was “To make an educational film about bullying” but that wasn’t enough because midway though, we started to say, “A dramatic film about bullying to be shown in UK schools nationwide” – I think we should have started with that as it would have made a big difference on early decisions we made.

Those are just a few, the ones that seem to mean the most to me right now as I start to recount the making of the film and I thought you might be interested.

Thanks David. Yes I agree with all the points. One thing really does stick with me, which is ‘make a declaration and write it down, the laser focus on that declaration…’ And before you make a declaration, develop it, hone it, be clear and specific. As you said “A dramatic film about bullying…’ is a much better way to put it and would inform your choices on the journey and keep your mind focused when everyone about you is losing theirs.

If you are interested in taking our online 2 day workshop, like hundreds of other film makers, check it out here…

How You Can Make Money With Your No-to-Lo Micro-Budget Film
Film Producers Survey by Stephen Follows in the wake of the NPA collapse
My First Lessons In Guerilla Filmmaking Transmedia Style! By Kristi Barnett
Dragons, Reapers and Guerilla Filmmaking: Turning Writer to Director With My First Short ‘...
Modern Technology on Modern Man for Virgin Media Shorts
Networking With Film Makers… how do you do it?

The Asiana Int Film Festival and other fun and games…
Free money for film makers! Collect yours here…