Last week I got a call from my good friend Eddie Hamilton, editor extraordinaire (who also edited 'Gone Fishing'. He is currently working on ‘Kick Ass’ for Mathew Vaughn and needed a way of presenting the edit, in HD, to folks without the need for laying off the film to ‘HDCam’ and hiring decks to play it back (which becomes expensive if you need to do it repeatedly). He discovered a small wonder and I asked him to share his findings with us.

The £70 Western Digital TV HD media player is a revelatory device. If you're working on a movie that is being edited at HD resolution, you can export an HD H264 Quicktime file from your editing computer (the same file format that Apple uses for HD trailers and TV/movie downloads) onto a USB hard drive or memory stick, plug that into the media player box and play it anywhere. The miracle is that the media player box has an HDMI connector which can plug into any home cinema projector, or (with a cheap HDMI to DVI adaptor) plug into a professional cinema projector (such as the Barco DP100 used at the Odeon Leicester Square). 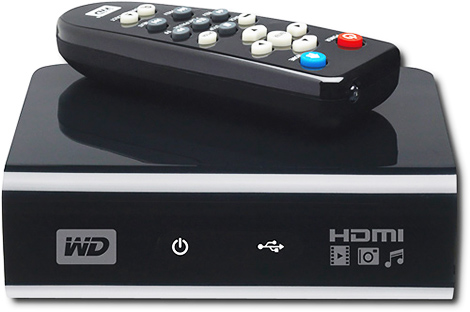 That means you don't need to play your movie onto an expensive HDCAM deck with an HD-SDI connector to play your film back in a huge theatrical environment. This is a HUGE cost saving as renting a deck will cost around £200 a day minimum.

The media player box will read many kinds of video files, photos and music too. It will read both Mac and PC hard disks.

As for sound, a good stereo mix created in your Avid or FCP will play back perfectly on a Dolby CP650 sound processor using a Pro-Logic audio decode (that's what most cinemas have).

If you can make a Quicktime with 5.1 audio (or download one from iTunes) the HD TV has a optical audio out which can plug into a home cinema sound processor for full 5.1 surround sound.

So as long as you know what you're doing, you could present your movie in the Odeon Leicester Square using the £70 media player box and a 16GB USB memory stick (a 100 min movie will be about 9GB in size (at 10 megabits per second H264 24fps video and 320 kilobits per second stereo AAC audio).

And the quality is awesome.

Thanks for sharing Eddie.

Film Producers Survey by Stephen Follows in the wake of the NPA collapse
50 Kisses Final Mastering: Making The DCP Part 1
Garth Unwin with special Q & A for his new film Zaytoun
My First Lessons In Guerilla Filmmaking Transmedia Style! By Kristi Barnett
Demystifying Distribution: Real World New Distro Case Study Strategy and Tactics
How You Can Make Money With Your No-to-Lo Micro-Budget Film