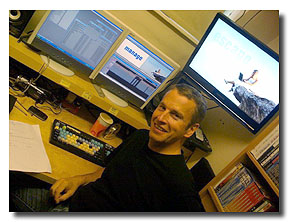 So here I am, Saturday night, in my little office with fellow film maker, Simon Cox, working flat out to complete this corporate film for the big presentation to the board on Monday. And it’s a HUGE project too, with loads of new technology being featured, with a cast and crew jet setting back and forth to the US of A, and a shoot as long as my first feature film!

There have been some stand out moments too – for me the best being when an actor steals a laptop in a scene we were shooting on the street. Of the five takes we filmed, three ended with citizens arrests from by-passers who took a stand for the law and cuffed out poor actor. How amazing is that?!

I have come to realize though, it’s a universal film law – when it comes to completing and mastering a film, there is never enough time. You inevitably pull an overnighter or two – so right now, both Simon and I are looking forward to breakfast tomorrow, probably having not slept at all tonight. And then we will look forward to a hectic day ahead to complete the film for the deadline…

The truth is though, we are having a great time – I really enjoy this kind of focus and deadline. It’s where the skills are really tested and the magical leaps of inspiration happen. All fuelled by pizza and coffee.

Ah… The life of a film maker!

'Gone Fishing' wins another festival… that's thirty something by my counting!
The next feature film… so close to being announced…