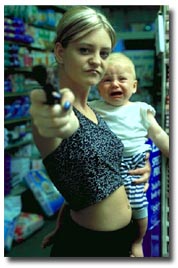 Last week I got a call form the BBC to tell me that my third feature film, Urban Ghost Story, would be playing on Tuesday the 13th of October at 12.05 at night (which is obviously Wednesday morning really!)

And since it has been announced in the various TV guides, I have been getting loads of emails from people who have since bought the DVD or read the chapter in The Guerilla Film Makers Handbook about how we made the film.

And the reviews in this weeks press are fantastic too, with the Radio Times giving it ‘film of the day’ and saying…

‘This movie demonstrates how a budget can often be the mother of invention. Heather Ann Foster plays a 12 year old girl in a Glasgow tenement who starts to detect supernatural rumblings while recovering from an ecstasy linked near-death experience. Jason Connery plays against type as a reporter seeking to exploit the story… Andrew Collins’

And the Daily Mail today saying…

‘Brought back from the brink of death, teenager Lizzie Fisher fears she brought something sinister back with her in this atypical British chiller. Low-budget, and rightly so – it’s from the people behind The Guerilla Film Maker’s Handbook – it is a curios but mostly effective mix of traditional horror and social realism’

It’s absolutely fantastic to screen on the BBC, and better still, BBC1 – and the deal was brokered by David Wilkinson of Guerilla Films, also interviewed in The Guerilla Film Makers Handbook (but not connected with the book, we just happen to have the same names!) David is one of the rarest of people in the UK film business – friendly and extremely helpful to emerging film makers, brutally honest (which is often hard for us all to hear) and in my experience (and most importantly), operates with very high integrity. Anyone who has taken my two day masterclass knows that I only recommend a handful of sales agents and distributors, and David is at the top of that very short list – and here is proof that David really does deliver! BBC1!

OK, so we have lots of reviews from when the film was released in the cinema here. In fact hen I just checked the link I was amazed just how many GREAT reviews we had, and from big players too.

Over the next few days, I am going to post some Urban Ghost Story related goodies on the blog – some of the features from the DVD and also PDF’s from the Guerilla Film Makers Handbook, so check back in.

But if you just can’t wait, you can buy a signed double disk DVD from us that also includes our second feature film, serial killer thriller ‘White Angel’. You can get the DVD here.

So a reminder – Tuesday the 13th, five past midnight, make a cup of cocoa and grab a  blanket… Urban Ghost Story, UK Network premiere on BBC1!

How to run your own micro theatrical release in London: Case Study
And it was all going so well... Or was it? Filmmakers, Screenwriters, Creatives... Are you...
Make YOUR movie NOW… Guerilla Filmmakers Masterclass 2015
Why we should all be embracing smaller film budgets and innovating
The Guerilla Filmmakers Masterclass Black Friday… MAKE YOUR FILM!
New Digital Film Makers Pocketbook nears completion
Read a whole chapter from 'The Guerilla Film Makers Hanbook' on the making of Urban Ghost Story, premiering on BBC1 tomorrow night

One Response to British Network Premiere of 'Urban Ghost Story' on BBC1, Tuesday just after midnight…