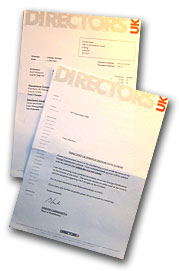 I received a rather lovely letter this morning, from Directors UK (formerly known as the DPRS, the Director and Producers Rights Society), telling me they had just deposited a couple of hundred pounds into my bank account for a film I made many years ago, the serial killer thriller White Angel. Apparently it has been shown in Poland, and under European agreements, the copyright creators receive a small fee!

If you have made a film and it has been shown in Europe, it may be that there is some money waiting for you – even if it’s TV or a short film. It’s not going to be a huge amount, but if you register with the DPRS, if and when monies do show up, they will funnel it to you and NOT any production company or distributor (they cannot touch this under UK law) – and if you make any further films in the future, you will get more payments then too. And the bigger the success, the more you will get.

I became aware of the DPRS / Directors UK about ten years ago when they contacted me to say ‘we have some money for you…’ and of course, I joined immediately. I was so impressed with what they are doing for film makers, that I interviewed Suzan Dormer for the Guerilla Film Makers Handbook – you can read that interview here (Suzan explains in greater detail how it all works).

Remember, this is free money that is guaranteed by European agreement. So if you haven't already, join Directors UK and collect what is rightfully yours.

The Asiana Int Film Festival and other fun and games…
The phone rang, and from that moment, everything changed… PART 1