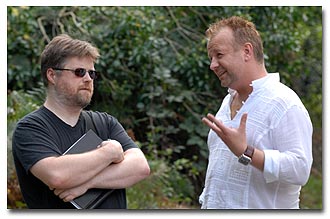 I just did a great interview with producer Ivan Clements, who produced ‘Gone Fishing’ as well as a number of features – that’s me with him in the pic, on the set of Gone Fishing – yes it was a producer / director conversation about budget or schedule no doubt!

The interview was about how to get deals and the state of mind required to hit the phone and ask for the profoundly unreasonable. Here is a little extract from some of the stuff he said…

Q – How do you get great deals?

Ivan – I think I should preface this with the fact that you need to be passionately driven by the project you are involved in. If you are not sold on the project, then how can you sell anyone else? Pick up the phone and start talking to people. It’s amazing how much people want to help in this business. And everyone is very forgiving of naiveté. It seems to me that almost everyone has been through mountains of crap to get where they are. Unlike school, where inflicting the same pain on newbies as was once metered on them is held in high regard, peers in the film business seem to actually want to help. How mad is that?

Q – How do you deal with the fear of picking up the phone and cold calling?

Ivan – Making the first call is always the hardest. It’s a bit like approaching someone you fancy. You’re full of excitement but you fear rejection. Just take the plunge. If you get rejected first time, remember, there are plenty of others to try. Have you seen the size of the ‘Knowledge’ in the UK. Or the ‘Hollywood Creative Directory’ in LA? Both are big directories, really big. Another great way to look at it is not that it’s cold calling, but rather rapport practice (thanks to Gary Craig for that).

Q – Why would anyone give you something for free?

Ivan – I never view it as getting something free. I prefer to view it as relationship development. What you’re saying to whomever you are trying to get to collaborate with you is this, ‘roll with me on this and you’ll get my future business and referrals’.  And you better be good on your word and mean it. If a lab gives you an unbelievable deal, make sure you go back to that lab with paid work. This will give you credibility and the word will spread. Go bad on your word though, and people won’t let you use their toilet let alone notice that your alive.

Q – Why do you think others don’t get such great deals?

Ivan – I’m not sure really, I can only tell you what I do to achieve results. Be funny. Most of the time this business is merciless if you’re not on the creative side. Make someone’s day with a giggle and you’ll get miles ahead. Lift spirits, cajole, be cheeky, ask for the moon always, always be VERY thankful for what ever you get. Make them feel like merciful gods. People like to feel that they have done something amazing for someone else. Don’t you?

Ivan – Something I learnt early on is never to pay rate card. If you’ve actually got money to spend, you should be able to get at least 40% off that quoted rate. That was minimum for me. 50-60% is achievable. It’s not unusual. Here’s a deal I negotiated with a well known film stock company which we’ll call Major Film.

I needed 100,000 feet of 35mm stock. Rate at the time was 24p per foot which came to £24K + tax. At the time, this was way beyond anything I could afford. And I can remember this deal clear as day. I invited the chief sales exec for a drink in a bar on Wardour Street, central London. I began by talking about HIM and his life (we later on became good friends). I definitely wanted to go with this company as they were much more friendly and accessible to guerrilla film makers like myself. After a few drinks we drifted into the deal. I said look Joe (real name withheld) I’m only doing this deal with Major Film because of you. But I’m absolutely flat broke.

‘So Joe’, I continued ‘How about this I’ve got £8K I can give you today if you can defer the balance till we hit profits and the VAT until I get that back next quarter?’ It was the ballsiest ask I’d made so far, but also the easiest in a way as I had no choice. There was no more money. Joe laughed, ‘you’ve eaten the ass out of my trousers.’ We shook on it and I bought another round.

Q – How do you get money out of investors?

Ivan -Once you’ve found investors, you actually have to convince them that it’s a sound investment. Film investment has had pretty bad press in the past. Fortunately it’s had better press more recently in the UK. This is due to generous government tax incentives that the savvy producer can take advantage of. These are in the form of Enterprise Investment Scheme (EIS) and the film tax credit. As long as a film is British qualifying, it can get 20% rebate on the spend. There are several companies out there that will cashflow this for you for a fee. Typically the fee is 3-5% of the tax credit. This means you get the money up front, less the fee, and then the tax credit is paid directly to the financier once the claim is made. EIS is very attractive as it reduces the risk for the investor. For every £1 then invest, the government gives a rebate of 20p. So their risk is reduced. Under the scheme, if they pay Capital Gains Tax, they can defer this for 3 years and write it off if the film fails.

Q – What are the key deals to get in place?

Ivan -This is tricky and very chicken and egg. You could find yourself with a name actor that actually means the film will make money, but who won’t commit until money is in the bank. And you may have finance that won’t attach until they see a signed contract with the named actor. This is a typical and tough position to be in and will be challenge for your creative negotiating skills. If you can’t get 100% financed privately, try and get a pre-sale that’s worth a percentage. Use ‘soft’ money (tax credit, forward VAT cashflowing, EIS). This can end up representing 40-60% of your budget and make you look much more credible to investors and key actors.

If you have any questions you would like Ivan to answer, drop me a mail hereand we will see what we can arrange.

Has The Guerilla Filmmakers Handbook helped you make YOUR film? I want to hear from you...
Making low budget drama 'Legacy'
Get a job in Hollywood... detailed insight into the dream factory
Catherine Hardwicke Genesis: How she wrote and directed her first film that led to 'Twilig...
Dragons, Reapers and Guerilla Filmmaking: Turning Writer to Director With My First Short ‘...
Top Ten Tips For Making Shorts from GFilm Alum Lee Greenhough
Urban Ghost Story, the making of… And the complete soundtrack by Rupert Gregson-Williams
Gone Fishing plays in Leicester Sq., support for European Premiere of Jaws documentary