Boy was it hurling it down like cats and dogs last night – so, to see a packed audience at the iMax theatre, with so many faces I recognised, was really wonderful. This screening of ‘Gone Fishing’ and Q and A session was part of DropShot 3, a kind of micro festival for film makers. Sure, screening conditions could have been better, but that didn’t seem to get in the way of anyone’s enjoyment of the whole event.

Stephen Follows and myself kicked off the proceedings with a Q and A session, in the middle of which we screened Gone Fishing. We then took questions from the audience. I guess the majority of the group were film makers and the questions were very much along the lines of ‘how to do it…’ It was both intimate and informal which made for a great conversation, after which loads of people came to me to congratulate us all on the movie – there were other ‘G’fishers’ there too, including a handful of our Associate Producers, camera man Steve Brooke Smith (who recently shot a vista vision / iMax short  film) and Martin Gooch who helped on the script (who had his own short playing later that night). 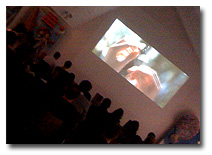 The main thing for me was that it was so heartening to see so many people make the very difficult choice to turn out on a cold and wet Wednesday autumn evening, navigating central London in rush hour, puddles and grumpy commuters, to come and see a lucky dip mix of shorts. Fantastic! Well done everyone and well done Samantha and her team at Drop Shop3 for making it happen!

As a side note, I also distributed flyers for the online Gone Fishing workshop and three people signed up after the event last night, and are now on their own rollercoaster watching it all online… Can’t wait to hear their feedback!