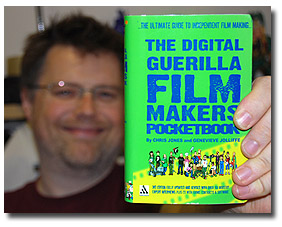 We are getting very close to completing the all new Digital Film Makers Pocketbook – a guerilla film makers handbook for the digital age. And isn’t it tiny!

In fact isn’t this 'mock up' tiny, this isn’t the final book.

And actually, this isn’t the final cover either (it's with a designer now), but it is the final size!

So you get the idea.

All this week, while I have been running around with Judy, working on our as yet unannounced feature film project for a Hollywood studio, ace production manager Helen Taylor has been permanently wired into a Skype account and ringing around the film business, attracting companies to sponsor sections of the book – there are ten sections, and so the opportunity for ten sponsors. 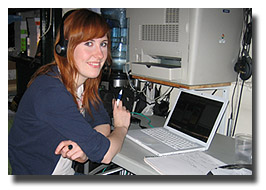 We aren’t really selling it as advertising, more just a logo, a few lines about the company and contact details – pretty much what we did with The Guerilla Film Makers Movie Blueprint.

And so far, even though we are in a credit crunch induced recession, we are doing pretty well – or rather, Helen is doing very well. I think it’s partly to do with the brand, the fact we have been writing for 15 years, have sold over 100,000 copies and this is our seventh book! And of course, Helen’s charm on the end of the phone certainly helps too. Not to mention her dogged persistence! 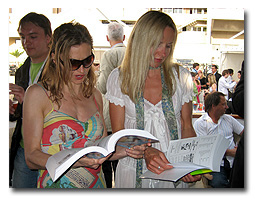 So this new book is smaller and shinier, but it’s the familiar house style mix of inspirational case studies as well as tips and expert advice. The plan now is to launch the book at the Cannes Film Festival 2010, with a big swanky party, much like the one we had for the last British book when we threw a bash on a boat in the marina (pic right). It was a very cool night!

So if you know anyone who might want sponsor a section in the book, send them to me, or show them this PDF here…

Can you write a 500 word children's bedtime story for Christmas?
The Guerilla Filmmakers Handbooks have a new shiny website
Marc Price, director of 'Colin', talks to the Guerilla Film Makers Pocketbook
Dragons, Reapers and Guerilla Filmmaking: Turning Writer to Director With My First Short ‘...
What are the five main outcomes for filmmakers attending the Guerilla Filmmakers Mastercla...
Gone Fishing Screening at the iMax is a SUCCESS!
British Network Premiere of 'Urban Ghost Story' on BBC1, Tuesday just after midnight…