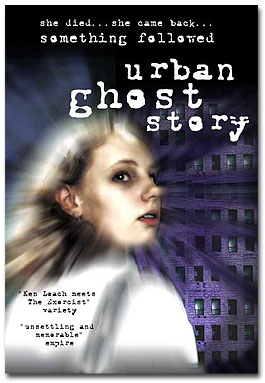 As promised over the weekend, in advance of the UK Network TV premiere of ‘Urban Ghost Story’ tomorrow night (Tuesday) on BBC 1, here is the complete chapter from the Guerilla Film Makers Handbook about how we made the film. It’s a PDF and 1.6mb in size, so will take a moment to download.

After the premiere tomorrow night, I plan to put up a video that never made it to the DVD – as the disk was maxed out with loads of film makers extras. I don’t want to say what it is right now, as those who have not seen the film will know what happens at the end – but for those of you who have seen the film, it’s a little doc about how we filmed the end sequence.

I was just scanning through the press pack too – you can read the whole press pack here if you are interested – and was stunned at just how good our reviews were. I had forgotten how many we got and how amazing they were… here are a few…

"A shrewdly judged chiller that boasts a brilliant, moving performance from newcomer Foster as the troubled Lizzie"
The Daily Mail

"Urban Ghost Story is one of the most credible studies of spectral obsession ever committed to celluloid. the film establishes a disturbing mise en scene that keeps one rooted"
Film Review

Crickey! No wonder the BBC bought it, now I want to watch it all over again!

And have a special offer on the double DVD (whith our second feature, White Angel, here.

One Response to Read a whole chapter from 'The Guerilla Film Makers Hanbook' on the making of Urban Ghost Story, premiering on BBC1 tomorrow night