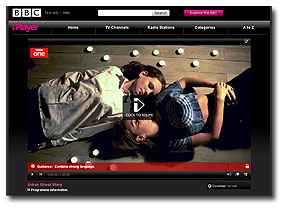 Wow! So ‘Urban Ghost Story’ played on BBC1 last night – I got loads of emails and texts during the screening, a kind of live commentary from friends. Awesome!

It’s been a long time since I have watched it and I was surprised by all sorts of details that had slipped my mind. And I must admit, I was very nervous and excited the moment the BBC logo came up and the film was introduced – I am so used to seeing that opening title sequence and hearing the music, but the BBC intro was of course a completely new experience. Very cool.

I know David Wilkinson of Guerilla Films, who cut the deal with the BBC, will get some viewing figures for us in due course. And the film is available on BBC iPlayer for a week – people in the UK can view it here.

OK… so, the video above is about how we achieved the breathtaking sequence at the climax of ‘Urban Ghost Story’, the car crash and the fall from the towerblock. Both were shot in a weekend that was separated from the main shoot, and was stunt co-ordinated by our late great friend, Terry Forrestal. This short video was supposed to make it to the DVD release, but had to be cut as we ran out of space…

So if we had to cut great stuff like this video from the DVD, what on earth IS on the DVD?

Well there is of course the movie in FHA 16:9, with the full Dolby Digital 5.1 soundtrack (which when played on a good sound system is awesome and very, very creepy). There are also two chat tracks over the feature, one with me and editor Eddie Hamilton. The other is with Genevieve and DP Jon Walker. There is a 20 minute or so behind the scenes featurette where we roll up our sleeves and explain just why and how we made the movie. There is also a feature on the deleted scenes, with explanations as to why we chose to cut those scenes – this is very useful to help illustrate the organic growth of the story, all the way through post production (if you are interested in comparing the film to the shooting script, you can download it here – this in itself is a powerful film education about how a story evolves from script, through shooting and finally through post production)

There’s a slide show too, as well as the full music score – we loved the score that composer Rupert Gregson-Williams wrote for ‘Urban Ghost Story’, but it never got a release on CD, and so, as we had the rights, we could actually put it on the DVD too! Finally, there is a cracking and terrifying documentary about the real case on which ‘Urban Ghost Story’ was very loosely based.

If you want your own DVD, you can get it here, as a special Guerilla Film Makers double DVD set with our second feature film ‘White Angel’, starring Peter Firth as a mild mannered serial killer. Again, a very chilling movie that gets under the skin. Here is the link to buy the DVD set.