Red meat, omelette, bread and beer. That’s what I am living on here in Bilbao, at the 51st film festival they have hosted. And the diet is a symptom of the relentless screening schedule of over 80 short films, giving

only a few moments sometimes to grab some Pinchos (like Tapas) from a local café, washed down with either a half glass of beer or an ultra caffeinated coffee that leaves you twitching through the films.

To my tastes, I have to admit the screenings have been tough, sometimes an endurance test. This is a high art festival – no surprise really when you consider the museums and galleries in the region, including the world famous Guggenheim gallery – I guess it’s a reflection of the people who live here and their tastes. There is no doubt they like it too, as the evening screenings are very well attended, packed out even. But some of the films last night left me positively baffled, what the heck did I just see?!? We are certainly in Europe, a long way away from the American festivals that I attended earlier in the year. 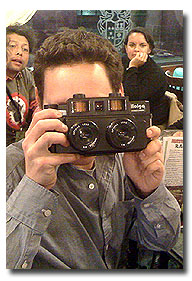 Still, it’s great to be challenged this way, and it always makes you think about the artform in new ways – and maybe this is the point too? To be exposed to films and film makers who you would not normally meet. And I have made loads of lovely new friends too, including touring American film maker Scott Tuft (in pic) with his very, very cool 3D stills camera (how retro, shoot 35mm transparency film and you look at images with a special viewer) – Scott made a deliciously dark film set in the sixties called ‘Makeup’, about door to door makeup sales women, starring Airplane star Julie Hagerty.

This is a very warm and friendly festival – there is no ‘deal comparing’, ‘agent touting’ and ‘over-competition’ with each other. Just long, long chats about movies, movie making, life and late night strolls along the river as you head back to the hotel room in the wee hours.

Blissfully, my iPhone does not work at all here – O2 just not seem to have a deal with a network. So, my phone has not buzzed all week. And it’s been a reminder at how we are all losing our freedom through over technologising our communications.  Mobile communications, facebook, twitter and the likes (social networking) are all great, but at the same time I recognise that they all invade my ‘down time’ at some point. And when I do switch off or disconnect from them, I start to feel a little like there is a party going on somewhere and I am unaware of it. Not sure if this is all healthy for us or not. So to have it forced on me is a bizarre relief.

Ironically, Skype does work on my iPhone, so within the hotel at least, I can make international calls for peanuts over wifi. Bonkers!

I do need more sleep though, and I need to eat something GREEN before another 15 or so movies tonight…!

50 Kisses selected for the Rhode Island International Film Festival 2014
The top six film festivals in the world, based on my experience... and none of them are A ...
Using video blogs to share your film experience... Rhode Island from the archives
Day 1 at Incubate in Tilburg
Nine personal and shocking experiences that reflect the terrible underbelly of SOME film f...
Tomorrow I Fly Out To Finland for the Tampere Film Festival, and maybe the Northern Lights
ZINEBI 51 – Day one in Bilbao
Bilbao Film Fest 51, the end is nigh…

One Response to Bilbao Film Fest 51, the first few days… (get me some GREEN FOOD!)