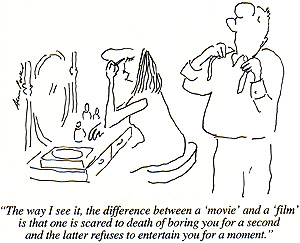 I have received a pile of emails from film makers after I revealed all the stats from the ‘Gone Fishing’ film festival run over the last year. Many were expressing frustration that it appears film makers are often unwelcome in their own countries (bizarrely, some US producers could not get into American festivals but did have success in Europe). It seems festival programmers have a rarefied taste and home grown talent is often simple ‘off the menu’ (most of the time at least). I am also sure that many of said festival organisers would take offence to this statement, but I am looking at cold hard data, being backed up by anecdotal evidence.

Film maker Connor Clements put it succinctly when he said ‘I think Americans are more interested in narrative driven films, and are more passionate about films than anywhere else’. This pretty much mirrors my experience in the US with ‘Gone Fishing’. It’s a sentiment that is echoed in one of my favourite Alan Parker cartoons too (pictured here).

I guess the lesson for us all is to target festivals where you think you have a good chance of getting in, based on the genre, themes and tastes of past selections and winners. As Alan Parker simply puts here… have you made a FILM or a MOVIE. It's an important distinction.

Of course this raises the ugly head of the festival research workload – it’s one thing committing to researching 300 film festivals, then entering a selection of the ones you feel are a best fit for your film – it’s another thing doing it! It’s not hard, but it does take a lot of time, organisation and tracking.

Withoutabox has helped by creating the paperless submission service (for a fee of course) and recently launched their Secure Online Screeners service – with it you upload your film to a secure server and the festival programmers wo which you submit can then watch all the films online. Very green and cost effective, and will save lots of trips to the post office, but I do question the wisdom of a selection process based on viewings on a computer, especially with regard to movies designed to be screened in a theatre – and when it comes to sound, most people will inevitably watch on a laptop with internal speakers so your film may sound terrible. I guess it’s the ‘YouTube’ generation way of doing things and it is undeniably the right thing to do from a green perspective.

In a couple of weeks we will be playing in Bilbao, Northern Spain, and I will be watching to see just how European audiences respond to ‘Gone Fishing’.

Well that happened...! Blood, guts and glory at Guerilla Film Masterclass
How I Cast Brian Blessed, Joanna Lumley and Jack Davenport in my fantasy short, Guest Blog...
Why the act of creation is ESSENTIAL for human beings
LSF’14: Commit now as sitting on the fence will get splinters up you’re ass
Whenever you feel like giving up, remember... Victory is close
Gone Fishing, the festival data is complete!
I will send the prize to the embassy of your country in Iran…