A couple of weeks ago, editor and Eddie Hamilton and myself sat down and spent a whole Saturday recording a chat track over the rushes for Gone Fishing – that’s nearly three hours of unedited 35mm footage, including main unit with sync sound, second unit, pickups days and of course the high speed Phantom slow motion. I have finally edited it all together and it’s now live as an extra module within the online Gone Fishing Workshop (anyone who previously joined also gets access to this as a member). Watching the rushes really did bring back all the emotions of the shoot, and the lessons learned. Eddie kept pointing out the time code on clapperboard as it really did show just how long each shot took to complete. In the rushes, one moment we are in the morning, the next it is late afternoon and we are fighting for daylight! It’s a slow process getting every shot right.

I was also surprised at how few shots we dropped – maybe four of five? Even though we shot nearly three hours of footage in all, we were extremely economical (a result of the extensive planning process with storyboards – one of the real revelations on the workshop is watching the anamatic of the storyboards and comparing to draft 3 of the script and also the final edit of the film).

Above is a short clip to give you a feel for what it is. Already several other members have downloaded the rushes themselves, without chat tracks, and begun editing their own version of ‘Gone Fishing’ – I wonder what they will produce? Will be fascinating to see.

I am also planning the final seminar to conclude the whole Gone Fishing experience and will be announcing that very soon.

The workshop is still discounted to £69.99, but prices will be going up for the Christmas rush, so grab it how by signing up here. 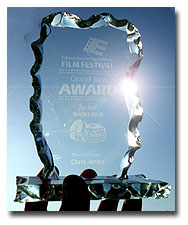 We now have a Vimeo Channel setup too, so you can quickly check out all our best videos – click on the logo on this page for Vimeo or here to jump to the channel.

On another note, I just received by FedEx the crystal award from the Edmonton Film Festival – it’s already become one of my favourite awards as it’s quite beautiful. Lovely! You can read a complete list of all of our awards here.

A great example of a Crowd Funding campaign email…
Lessons Learned On A DSLR Drama Shoot... Day 2 Wraps
Bradgate Brings Some Finance!
How To Crowd Source Your Movie Poster Design... run a competition!
After years working in the real world finding my life rushing past me faster and faster, i...
Six hours of new features added to the online 'Making The World Class Short Film' Workshop – sign up discount still available!
Request from Down Under for Oscars Insider Tips…