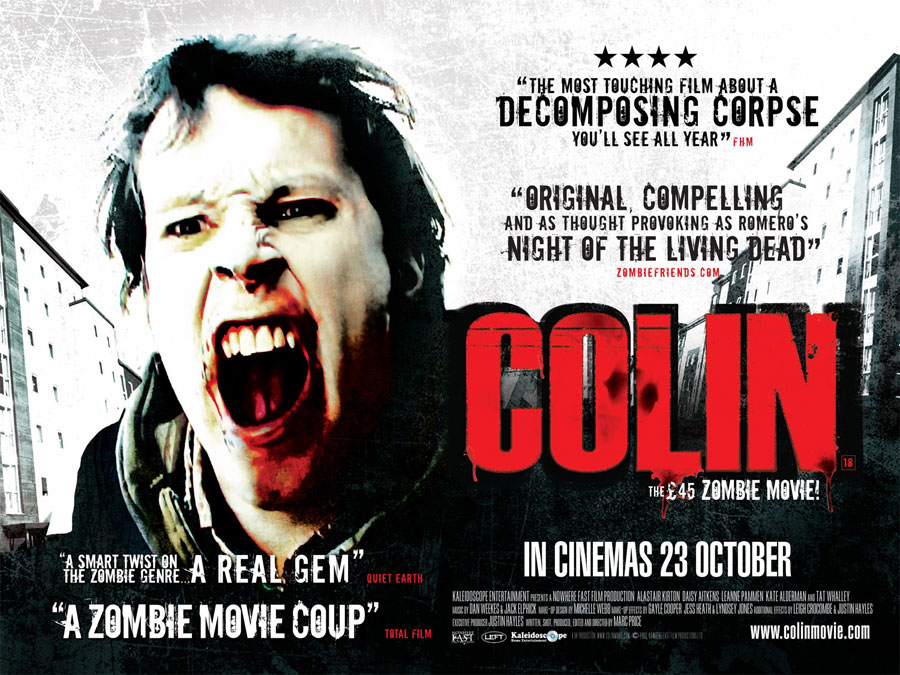 I just spent the last hour and half interviewing the Marc Price, writer and director of zero-budget Zombie movie, ‘Colin’, for the new Guerilla Pocketbook. Marc is a effervescent Welsh lad, self confessed movie geek, whose humble view of himself and his role in the film business is both refreshing and charming.

We all know the broad strokes behind the making of ‘Colin’, but I wanted some real facts and not just PR hyperbolae. So I questioned hard…

The budget? As suspected, the ‘£45 budget’ claim was misreported by the press. Marc cleared this up… ‘I actually said, AROUND £45…and when I heard someone thought it might have cost as much as £500, I was shocked as I didn’t have that kind of money…!’ So it’s true. The film was made for the loose change in his pocket.

No-one was paid any money. No-one was paid expenses. Anyone who helped was expected to supply their own stuff, like make-up from make-up artists. No-one complained and everyone had a great time… ‘Everyone paid for their own tube pass, and had to bring sandwiches. In the morning they would be made up as a zombie and in the afternoon, they would be cleaned up and play a human… in some scenes, people playing zombies are actually chasing themselves as humans!’ On one day, they had 100 actors turn up for this experience.

So even though BECTU are making wild claims about enforcing minimum wages, there is a thriving and seemingly expanding group of people who will continue to make movies irrespective of such ‘rules’ (I aim to do an interview with BECTU very soon to really get to the bottom of this).

Critical to the success of ‘Colin’ though was that immediately reportable phrase, ‘the movie cost £45…’ and as Marc said, most journalists outside of media journalists, think that going to Cannes means that you are IN THE FESTIVAL. And so his ‘credit crunch £45 movie’ was widely misreported as being a contender at the Cannes Film Festival. This was a real ‘against all odds’ story about a film maker who made something amazing from latterly nothing. No fat cats involved, just passion, glory and lots of guts! This was too juicy for editors in need of a story from the very downbeat and subdued Cannes Film Festival in 2009.

Marc also feels, and I agree with him here, that the film had to stand on its own two feet too, albeit shuffling feet for ‘Colin’. While of course there are many problems with the film, it does have that terrific central perspective of telling the story from the zombies angle, and it remains faithful and honest to that intention, something other film makers might have lost their nerve with. Marc has proved he is a film maker of vision and integrity.

And how did it do in the UK? Well only having been out for a few weeks, they have shifted (reportedly) close to 30,000 units. Very impressive.

OK so the whole interview will appear in the next Guerilla Pocketbook, but before that, I do plan to run a big event with Marc in January, where we will really get to dissect his success in front of a live audience. If you want to attend, join our newsgroup by clicking here and you will get an email when the details are fixed.

How cliché is your script? Can you see your work in these two trailers?
Morpheus... 'Do you think it's air you breathing now?' Choose your reality with open eyes ...
How one filmmaker secured a UK distribution deal for their £30k horror movie WITH advance!...
The four principles every creative needs to use when asking for help for their project: Wh...
Ted Hope and Ed Burns discuss the value of failure in the creative journey
Did you know, before I was a film maker, I was a stunt double for Santa? Really!
Four Eyed Monsters film maker Arin Crumley speaks to the Guerilla Film Makers Handbook, on the most appropriate of settings…!