By Chris Jones on December 4, 2009 in Art and Stroryboards, Festivals 0 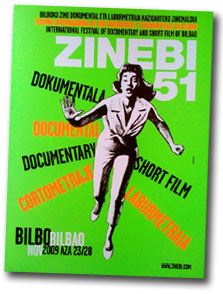 I have had a lot of emails and comments on the blog regarding my experiences at the Bilbao Film Festival last week – so here I am blogging about it again!

And I want to be really clear again, the festival, venue, town, people, film makers were all wonderful. But the films, were in my opinion, largely impenetrable and self indulgent.

One thing I did not mention in the last blog is that of ‘building a programme’. By that I mean, selecting short films to run in a specific order as to deliver a considered experience within a single 2 hour program. Americans do this very well, with a mix of animation, live action, documentary, down beat, upbeat, comedy, tragedy… so that when it’s over, you have had a dynamic experience, an experience that was planned to play that way. I am sure they did this in Bilbao too, but as pretty much every film was either impenetrable, or downbeat, it made for a monotonous experience by the very end. The tone of almost all of them dark, with virtually no light at all.

OK, so here are a few of the comments I received…

You said your rant about European films doesn’t help anyone, but you’re wrong! This is one of the most important blog posts I’ve ever read.

Right now I’m suffering through a selection of student films from Europe’s best film schools in Camerimage, Poland. They are long, slow, grey and suck the life force out of me. The few exceptions shine out of this pile of… umm, like water after a long, depressing run.

The point about clichés is also an important one: most of these films are not breaking new ground. It feels like the makers are only thirsty for acceptance of their peers, and couldn’t care less about the audience.

So you see, the rant was very helpful. Like after a great movie, I’m comforted by the knowledge that I am not alone with my experiences.
Jesse Jokela
www.twitter.com/jessejokela

Just had to say your last blog entry was really funny. Was watching a bit of that TV show, ‘School Of Saatchi’ the other day – like X Factor for modern artists. One girl got through for hanging a referee’s whistle off a toilet handle. That was it! Tracy Emin was going on about how it had ‘sexual connotations’. It actually made me proper angry. The worst thing about these ‘artists’, film or otherwise, is that if you say it’s crap, they just dismiss your opinion as an ignoramus. For me it’s a self perpetuating little clique of pretentiousness for people with no talent who want to pretend they have vast inner depth – The type of people who think David Lynch is too commercial. A bunch of soulless ‘high society’ rich people give their support in the hope that some personality will rub off on them and, hey presto, you have Damien Hirst and Banksy. Anyway, very funny. The 7 Symptoms is like something I could imagine Adam and Joe doing as a guide to making an art house film.
D.

This blog entry articulates a problem with films so well. Chris, you write in a very balanced, considered way.

You write “They were too busy making a point, a point that all too often was lost in their over self indulgence.” But I think Symptom One hits the nail on the head – too many “Art Films” (shorts or features)are pointless.

Which is easier: 1) cut together a series of unconnected (perhaps pretty)shots, perhaps linger on them, maybe have a confusing voice over, chuck in a provocative image or two. 2) craft a considered work where the images and sounds have some sense of form and coherence, the work connects with the audience and resonates with them, managing to elicit a variety of satisfying emotional responses?
Jude Poyer

Well, I’m the lone voice of disagreement I’m afraid. Firstly, if you want people walking out of shorts try Raindance. Nothing wrong with their programmes, but everytime I’ve been at a shorts programme people have left after each short, leaving the filmmakers and a couple of people left for the last one (and the audience was pretty much just the filmmakers to begin with). Whereas Bilbao, as you said, had large audiences, so the fact 75% of a large audience stayed would, I’d suggest, mean they were doing something right.

I’ve been to festivals all over Europe, and yes, they do tend to be more serious than US festivals, but that’s no bad thing. I prefer that kind of film, you don’t. I really don’t see why you can’t just let them have their choices without trying to pick holes in what they do or find fault with the way they run it. I’ve seen your film, it was OK in my opinion, not really my kind of thing, but I’d never get you to try and change it, it’s what you do. So why have a go at Bilbao? It’s just what other people like, and what a dull place the world would be if we only had one thing to choose from. (and I’m just a filmmaker in the UK, nothing to do with Bilbao or their festival)
Ron

And perhaps most interesting, from a Spanish Film Maker…

As you write, the whole issue of the Spanish Ministry of Culture’s film financing seems to have been put on hold by Brussels. It would be great to hear your take on that. For those of us, (definitely myself) who are sick to the back teeth of the sheer rubbish produced under these ‘subvenciones’ (ie my taxes) I’m only too happy to hear Brussels is meddling. And I re-read once again the scathing comments made by ordinary punters in the spanish press (of which there is a 99% approval rating of curbs on film financing). Ultimately, as you’ve just experienced, re your ‘bafflement’, you will understand that the audience is not even discussed during scripting or shooting as I’ve witnessed on many occasions. Spanish film-makers just don’t talk about the film from the audience’s point of view. Perhaps you could help them out with one of your brilliant lectures.
Alexis Mayans

A picture speaks a thousand words… use artwork to help deliver a killer pitch
More Cash and Crewing!
FREE online seminar, 'Making Web Based Comedy and Films' with the Misery Bear Team
The phone rang, and from that moment, everything changed... PART 2
The top six film festivals in the world, based on my experience... and none of them are A ...
A ‘declassified’ blog from 2008! The Oscars Short Film Shortlist is announced!
It was like Ground Hog Day all over again… Only with bigger teeth!