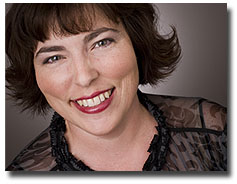 You know, given that we are all in a communications business, I am astonished at how badly many film makers chose to represent their own image. As part of writing The Guerilla Film Makers Pocketbook, we have been conducting countless interviews, and alongside the words we feature a photo. Hey, no big deal you would think? Wrong!

I would say that roughly half of the people we talked to for the book got pretty awkward when we said, ‘do you have a photo’? It got even weirder when we saw some of the pictures! I mean really, we are in a media business! Image is vital. I thought it worth mentioning as it’s one of the things you will need in your arsenal too – a great headshot, or photo of you on set in action. Pictured here is Sherry Candler, who is starting to feel like our resident PR guru. You really get who she is from this picture. She is smiling and engaging with me the viewer right now. That’s a great shot. Doubtless taken by a pro.

So what are you going to supply that journalist when you get that killer break? A photo of you on the beach (yes I had those sent to me for the book), passport photo (had that too), or cropped photo of you in a group (plenty of those), or my favourite, a photo of you stood by a celebrity? It may be great for your Facebook or Twitter profile, but it’s inappropriate for a PR headshot. Films are BIG investments and when it comes to the crunch, people with money want to know you are professional.

The thing is, you need to get this organised now, because it’s too late when things start to happen. There just won’t be time when you are on that rollercoaster. Another film maker who I see is getting this right is Danny Lacey – check out his blog, you get who he is right away. Great picture.

Remember, you are your greatest asset and ambassador. There is no point hiding behind the curtain. Get yourself front and centre baby!

So ditch those painful pix of you drunk at a film party and get a pro to take some great shots of you in action. 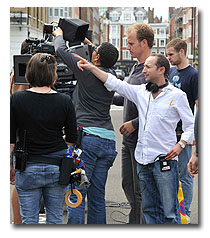 Final tip – if you want an ‘I am a director’ photo. Stand next to a camera and point. Apparently that is what directors do. Here is a great one of my good friend Johnny Newman on set with his new feature film ‘Swinging With The Finkels’ (and I also interviewed him in the new Guerilla Film Makers Pocketbook.

If you find yourself helping out on a large scale production as a runner or otyer job, in the lunch break, go stand next to the camera and click a cheeky one off. We won’t tell if you don’t.

The 2013 Guerilla Filmmakers Masterclass draws closers…
Why we should all be embracing smaller film budgets and innovating
Top 13 Things To Do When Being Interviewed for Radio About Your Film
Top six ways to save money on your film
Movie Blueprint New Cover Quotes!
Breaking Into Hollywood: The Guerilla Pocketbooks arrive!

One Response to A picture says a thousand words… How good is your headshot?