Come along to this special screening of ‘EXAM’ on Sunday January 10th at 2.15pm, Odeon Panton Street, Leicester Square where we first screen the movie, then the film makers reveal just how they made this low budget Brit psycho-thriller, got it into theatres and ended up with four star reviews from both ‘Total Film’ and ‘Empire’. Rotten Tomatoes also gave it the Editors pick, and film critic Mark Kermode gave it a big thumbs up.

Here’s how the event will play out – first we watch the film, screened off a 35mm print (as part of the UK theatrical release) – it’s a nail biter too, so bring a your partner to squeeze his or her hand…

Then we stay in the theatre, courtesy of our super helpful hosts at Odeon cinemas, where we can really get into the nitty gritty in an extended Q and A session with the film makers.

I will be chairing the 90 minute workshop as I am one of the producers on ‘EXAM’, so expect some direct, honest and robust conversation targeted at helping you learn how to get the most out of your project, and how to get it into theatres.

As director and writer Stuart Hazeldine will be present, you can bet we will chat a great deal about the script and directing a first feature film, but I also want to steer the conversation into post production, and especially sales and distribution where there will be a full autopsy on how to theatrically release a film in UK cinemas. 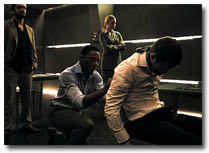 Editor Mark Talbot Butler will also be present to chat about editing, as will composer Matthew Cracknel. And if you have any questions, there will be time to ask too.

There’s loads of press for the nationwide ‘EXAM’ release going on right now, so keep an eye out. There is also a Facebook group you can join here.

Here are some links to recent articles, clips and reviews…

Sunday promises to be a stand out event and I hope to see you there. Remember, seating is limited so sign up asap if you plan to come.

Tickets are £14.00 and only available through us. Use the button here. If you have problems, drop us an email at mail@livingspirit.com (bring your pay pal receipt on the day – your name will be on the door).

About Stuart
Film maker Stuart Hazeldine, after a successful career as a Hollywood screenwriter (scripting movies like the Nic Cage film ‘Knowing’), decided it was time to bite the bullet, and direct his first feature film. And he had the perfect project tucked away in his top drawer too, ‘EXAM’, a tense, smart psychological feature set in a single, mysterious room, kind of ‘The Apprentice goers to Hell’ as Mark Kermode put it. Stuart is very generous with his insights, always offering genuinely useful advice gleaned from his own experiences.

How you are helping directly… The House Nut
If you plan to release you film in a theatre, you need to know about the house nut and how it works… 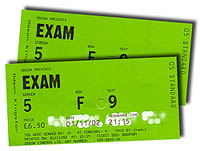 If you come to this screening, you will be helping the film and film makers SIGNIFICANTLY and participating in the success of the film. When a film is released, the opening weekend box office figures are instrumental in guaranteeing future screens. Those figures are calculated on Monday morning, and are based on the ticket sales from Friday through to Sunday. That’s why we have chosen to try and fill the first screening on Sunday – traditionally a time slot that is tough to get audiences to attend.

So your attendance really does make a difference, and if enough people come along, the film may crack the house ‘nut’, an all important figure that signals ultra success, usually reserved for the likes of ‘Bond’ and ‘Harry Potter’ – it’s a complex calculation based on the amount of seats, the amount of screenings and the amount of tickets sold – more on that on the day of the screening…

So you see it’s an amazing WIN WIN situation. You get a great movie, to meet the film makers and ask lots of questions. They get a full house in a tough time slot and crack the house nut. Everyone is happy.

A Masterclass In Microbudget Film Making - Interview with 'Paranormal Activity' writer and...
'Swinging With The Finkels', Inspirational Script to Screen with Jonathan Newman
How To Write For Hollywood And Live In The UK: Podcast with Stuart Hazeldine
EXAM: Meet the filmmakers, read the screenplay...
LA Screenings Video
A new year, a new URL, a new logo and a new movie…
Read The Script, Watch The Movie, Meet The Film Makers… £14 for a Low Budget Movie Masterclass

One Response to Do You Know How To Release A Feature Film Theatrically In the UK? Special Screening of EXAM and workshop on Sunday at the Odeon, Panton Street, Leicester Sq.