Late last week I found out that EXAM has been nominated for a BAFTA!

Writer and director Stuart Hazeldine, who was gracious enough to share all his knowledge and experiences while making EXAM at our special screening last week, was nominated for the Outstanding Debut By A British Writer, Director Or Producer award. You can see the full list of BAFTA nominations here.

For me, this is the first film on which I have a credit that is going to the BAFTAs! WOW again! 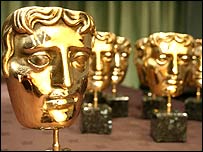 It’s a tough field this year though, with very string competition from Duncan Jones with ‘Moon’, San Taylor-Wood with ‘Nowhere Boy’ and Eran Creevy with ‘Shifty’ (I haven’t seen ‘Mugabe and the White African’ so I can’t comment). Iinterviewed Eran for the upcoming Guerilla Film Makers Pocketbook and I can tell you, he is a charismatic and focussed film maker. You can see the post I did over the summer here.

There were about 60 eligible writers, directors and producers this year (and that's just from the films that were good enough to get a theatrical release!) so it’s great news that BAFTA felt EXAM should be honoured in the final five.

In know I will be watching on TV on February 21st , bubbly in hand, so that when Stuart and producer Gareth pop up on screen I can toast their extraordinary success! Fingers are crossed.

See you at the BAFTAs everyone!

From the archives... Script to screen on EXAM, with Stuart Hazeldine
EXAM: Meet the filmmakers, read the screenplay...
50 Kisses HUGE Box Office Success... The numbers are in!
Gone Fishing at Rhode Island, the complete Webisodes...
How To Write For Hollywood And Live In The UK: Podcast with Stuart Hazeldine
Gone Fishing on Korean Fishing TV channel!
Join the spankingly new and shiny Guerilla Film Makers Handbook Facebook Page