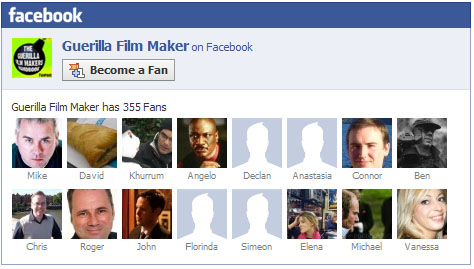 FaceBook. Talk about idiosyncratic. It’s an amazingly powerful tool but blimey, it sure aint intuitive.

OK, so today I set up the Guerilla Film Makers Handbook Facebook Fan Page – you can join here. I had previously setup a Facebook Group for the book, but was immediately contacted by marketing guru Sheri Candler (remember we recorded a podcast with her, you can listen here) who thankfully set me right before too many people had joined the now defunct group. You see it’s really rather important to get this setup correctly, right from the get go. If you get too far down the line in a Group but need a Page, or vice versa, there is no way to migrate your members from one to the other.

So what are the differences? Well it’s pretty cryptic, until you have actually been there and have the T shirt. And even then, because of the idiosyncratic way that FaceBook operates, it remains a little nebulous at times.

Sheri Candler, who is currently twittering like crazy from Sundance (about a low budget horror film I keep hearing great things about called ‘The Yellow Brick Road’) wrote an excellent and detailed post on her blog about FaceBook Pages and FaceBook Groups, so there is no point me repeating it here. You can read it here.

Our FaceBook page is the start of something that we intend to be both exciting and inclusive for all film maker, much in the same way that Gone Fishing was. And we are making the big announcement in Cannes about it, as well as hosting a launch party for The Guerilla Film Makers Pocketbook. And this year, we also are planning a Cannes Field Trip for film makers who have never been. So if you are interested in coming along to Cannes, join the FaceBook Page and also join our newsgroup here.

Right, that deadline is not going anywhere… 12 days to locking the book!

PS – Gen has a new blog post on www.GuerillaGal.com too

Shooting microbudget on the steets of Brighton with Mark Banks
Top Ten Tips For Making Shorts from GFilm Alum Lee Greenhough
Get a ton of filmmaking tips, tricks and articles every day
Get a job in Hollywood... detailed insight into the dream factory
Has The Guerilla Filmmakers Handbook helped you make YOUR film? I want to hear from you...
EXAM gets a BAFTA NOMINATION!
The Great Film Makers Social Media Experiment is done and the results are in…