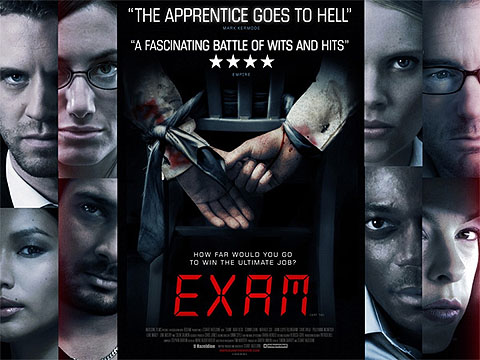 Those of you who came to the special screening of EXAM, a movie I produced last year, got the chance to see the film on the big screen, then meet the film makers… And now there is more exciting news!

The Oscars may be the biggest movie awards show of the year and the BAFTAs the most well mannered, but the coolest awards show is always the Empire Awards, run by Empire Magazine, who have been very, very nice to our little film lately. So head over to their site now at…

… and simply add the names of your favourite films of the past year into each category.  Hopefully you'll put us down in a few of them. The big categories we may have a shot at are Best Newcomer (seeing as we got a BAFTA nom for Outstanding Debut we have a decent shot here), Best Thriller and Best British Film (we'll let you vote for Avatar in the Best Film category if you must).  Feel free to vote for us in loads of categories you like, though!  Actor, Actress, Director, Film…  just not Best Comedy, please.

Voting closes on FEBRUARY 23RD, so you have three weeks to get your vote in!  Get your friends and family to vote for us too, and you can vote even if you don't live in the UK – the wonders of the internet, eh?

Please share this with ALL your friends – AND REMEMBER, YOUR VOTE COUNTS! It really does…

EXAM: Meet the filmmakers, read the screenplay...
Meet The Nativity Wins 'Best Festival' Film at 22nd Jerusalem Awards at BAFTA
The London Screenwriters’ Festival to receive £42,015 from second round of the Government’...
How To Write For Hollywood And Live In The UK: Podcast with Stuart Hazeldine
Video Postcard from the 50 Kisses Premiere
From the archives... Script to screen on EXAM, with Stuart Hazeldine
The need for failure in YOUR film making success strategy…
You help me… I help you… call it film making by Karma

2 Responses to EXAM is up for the Empire Awards… PLEASE VOTE!