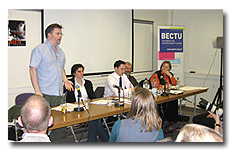 And while I think there was a genuine desire from everyone to find common ground and a framework to help indie film makers, there was also a great deal of grand standing and vilification.

On the panel was myself, Jess Search from Shooting People, Benetta Adamson, a film maker and BECTU member / activist and Martin Spence of BECTU. The debate was held at the University of London Union.

So let’s be clear, this was BECTU organised event and was largely filled with BECTU members. The day before, this message was sent to all BECTU members via email (message is edited down to the pertinent bits – happy to supply hole message to anyone interested)…

‘The debate is a massive meeting for us. It will air all the issues around the free labour practice, which has been exposed as unlawful by BECTU at the Employment Tribunal. We know that the "work 'em all hours for free" side will be there in numbers to slag off BECTU for "ruining the industry".’
Tom Bell, Supervisory Official, BECTU

So you can see, the fires had been stoked.

To be fair, when I read this email, I contacted Benetta who immediately apologised, and I believe she was genuinely upset as the inflammatory language did not foster an atmosphere for constructive debate.

On the tube journey over, I did feel like a condemned man.

So the room was filled with around 150 people. The atmosphere was charged. 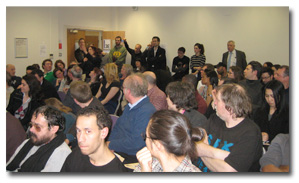 And I gotta tell you , I was terrified. Really terrified.

But the indie film sector has been very good to me all of my life, and the friends I have who continue to make films, I felt at least, needed a voice at that table, and for whatever reason, I was charged with being that voice.

Right from the get go, Jess from Shooting people was FANTASTIC! Really amazing. Her contribution was balanced, considered, researched, passionate and she spoke the language of ‘debate’ as eloquently as our BECTU counterparts.

And to my amazement, I found myself agreeing with lots of stuff that was said from all sides of the debate.

Martin and Benetta both raised lots of points and offered some genuine solutions, including a possible code of conduct and proposed exploration into film making within the vehicle of a co-operative.  Good, good, great even. It might work. We should really look at it. We all want the same things. Namely safety for everyone and freedom to create. Wow! We are getting places…

But you know, I still could not help feeling so very depressed. Why?

At the start of the debate, Jess asked a number of questions to get a feel for the room.

Here are my recollections of some of those questions and the results (this is from memory so the phrasing may be slightly off, and the numbers rough guesstimates).

‘How many people in the room believe that a person should NOT be allowed to work for free…?’

About one third of the group raised there hands.  That’s right, those people are telling YOU that you do not have the right to choose to work for free. Not under ANY circumstances. Never.

Now look I really get it, there is a law there to protect the most vulnerable people from exploitation, and I, as well as Jess, and every film maker I know, fully support and champion that law.

I also believe that it is a fundamental human right for people to choose to work for free if they want to. This is a philosophical stand point that I can not see any way around.

Jess then asked, ‘how many people here are runners?’ There were a just few hands in the air ( I recollect two). This is important because this debate, which was in some ways quite technical and specific, was actually about runners and assistants – those being the ones directly impacted by the ‘free labour’ and National Minimum Wage crossfire. It appeared that virtually NONE of the people in the room were actually the people whom the debate was actually about!

I pointed this out and no-one seemed to think this was a big problem.

Let’s just reflect for a moment on what happens when right minded, honourably intentioned, good people, interfere in other peoples lives.

But what really depressed me was just how quickly large sections of the room demonised indie film makers and began throwing crap. Yes there was some crap thrown back from us too. And so I kept taking a stand for change, retracting some of the things I said in frustration, in an attempt to foster agreement and a way forward. ‘Let’s set aside our differences, let’s find what we agree on, let’s give up a little of our positions in order that we find a framework that really works…’

You see there could be something terrific out of this debate, some kind of structure and framework that would protect film makers and producers, and their cast and crew, from each other, disaster, unscrupulous behaviour and the like.

It was actually quite exciting and invigorating that it was a possibility.

But moments after everyone was applauding and seemingly agreeing with my attempts to find the middle ground, someone would throw in an incendiary comment that would immediately polarise the group once more. And we were back where we began.

And the genuine ‘hate’ was back in the room. I don’t experience ‘hate’ much in my life, I am generally surrounded by joy, possibility and fulfilment. So it was upsetting. I don’t mind admitting it (to be clear, I can't say if anyone actually hated me, I can only tell you that is what I felt).

It was sad. Really sad.

And this pattern happened many times.

I kept saying to people ‘look, let’s meet for a drink, let’s share our common ideas and find ways to move forward – we do agree on most things…’ Yet, only film makers came to me in the bar after to say ‘thanks…’ Aside from the panel, (to my shell shocked recollection) no BECTU members came to me to see if they could contribute or help to find that common ground.

‘Wow, that was scary. I am a little surprised by the passion that these people have in stopping new entrants into the business. I felt like a 'scab' miner from the 80's. I really am amazed, when 'intelligent' people get so enraged at my desire to coll
aborate on other peoples projects, on whatever terms I choose, that they liken me to a mugger or someone who wouldn't report a burglary. Fascinating… It's probably best not to put this on your blog…’

His final comment about not putting this on the blog (and I emailed him to clarify before posting here,  he actually meant ‘don’t include my name’) really gets to the heart of one major problem. BECTU and the people who appear to be allied with BECTU (but who are technically NOT) are downright scary. I am a pretty robust chap, but I did feel ‘hated’ by some people in that room. Genuinely ‘hated’.

How must that feel for a sensitive, creative 18 year old film maker who has no pathway into the business other than by creating their own way in? Again the very people BECTU should be fostering and reaching out to are the people who are intimidated, confused and terrified by them.

Listen I get it, BECTU and their representatives are used to dealing with very difficult and problematic people every day – even unscrupulous people, possibly even criminals. It’s their job to be tough and robust, but that line can easily be seen by some people as threatening and intimidating. I absolutely know that is NOT what BECTU are setting out to do.

None the less, I was pretty intimidated at times by BECTU. I hope that they can try to see themselves through the eyes of emerging film makers, or they will never win hearts and minds.

I will make the formal request that in the interest of clarity and fostering a way forward for everyone, BECTU release the video unedited. If they cannot host it on their servers, I will happily accommodate it on mine. There is absolutely NO REASON why this video should not be made available. I hope Jess at Shooting people and EVERY Shooting People member makes this request too.

So after all that, there is a hope of something to come out of all of this. Let's see of something appears. And if so, if it is workable. I remain open minded and embrace anything that protects those who need and want protection.

I want to thank Benetta who was understating throughout. We disagree on some stuff, we agree on much more. I also want to thank Martin, who was as tough as an old boot, I can see he fights the good fight for honourable reasons. He does good work. 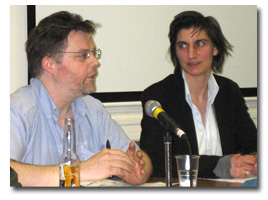 But for me, Jess was the superstar of the night. We are so lucky that we have a film maker as committed and eloquent as Jess Search fighting for a sustainable, reasonable and fair solution to this problem we all face. She was of course supported in the front row by Cath and James from Shooters and thank god, as I also fed off their vibes and love too! And thanks for the beer guys!

As for me. On the way home I felt very unsettled by the whole event. I had a growing nagging feeling that even though I had attempted to find a middle ground, that I had also been vilified, attacked and generally dragged backward through the hedges. It seems that people who have never worked with me are happy to demonise me.

Maybe I should be tougher. Maybe I am just a sensitive creative who should get a grip.

I invite comments, especially from anyone who was present – from both sides of the debate.

Onwards and as ever damn it, upwards!

***UPDATE*** You can read BECTUs version of events here.

Networking With Film Makers… how do you do it?
Neil Gaiman Keynote Speech: Embracing Change and Mantra’s for a successful creative life
Top ten Winston Churchill Quotes EVERY Filmmaker Needs To Hear
The Guerilla Film Makers Masterclass, Final Feedback
Why do we do what we do? Unlocking the genesis of the Creative Muscle, Mind and Heart
BAFTA nominated ‘Shifty’, a Guerilla Film Makers Script To Screen presentation with writer and director Eran Creevy
How to write a killer letter to get help for your project…

57 Responses to BECTU debate and the National Minimum Wage…