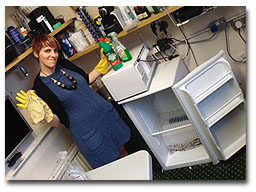 This weekend was spring cleaning day in the Living Spirit office at Ealing Studios.

Those of you who have visited my office will know that it’s more like a strange little ‘Harry Potter’ hobbits hole of a cupboard than that of a film production office. And that suits me just fine. I learned a long time ago that one of the keys to success is the ability to survive the drought and famine of film making (be it the economic downturn, long periods of script development or simply a project that fails for reasons beyond your control).

So for me at least, the smaller the office, the better. And if you feel tempted to rent an office for your company, before signing any contracts, ask if they have something cheaper, smaller, maybe tucked away somewhere… In the long run you will not regret it. And if you have amazing success and it's too small, well trust me, this will be the least of your worries!

Lucia, my dear girlfriend, had offered to come in and pretty much industrially sterilize the environment for the next major project we will be launching – whereas I would have given it a light dusting, she attacked it like the terminator! So thank you Lucia for driving me hard to get the office ship shape (and doing the majority of the work while I watched in amazement!)

And ‘that project’ that we will be launching in the coming weeks, will be running out of this, ‘The Production Office’. And we are planning a very exciting window into this world for everyone to experience…

A Masterclass In Microbudget Film Making - Interview with 'Paranormal Activity' writer and...
Failing to plan is planning to fail... Film making success lies in pre-production
Why costume, makeup and production design is so important to your film
Guerilla Film Makers Masterclass Alumni Rhys Davies: Micro Budget Horror Case Study, Relea...
Top six ways to save money on your film
Micro Budget Film Making Law Number 8… Get A Single Shooting Location To Fulfill Multiple ...
Lunch with the cream of the British Film Industry. Rather civilised really!
Networking in Cannes tip… be remembered

One Response to Film Makers, keep your overhead low and rent a small office!