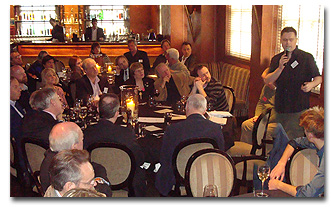 I have just returned from central London after presenting to The Media Luncheon Club at the swanky W1 restaurant, Hush.

The club, which has been running for sixteen years now, meets every month to hear a film expert present – past speakers have included Tim Bevan of Working Title. Ray Harryhausen legendary animator and next month is Guy Hamilton, director of three Bond movies.

Dining at the event is the cream of the British film business, with producers, directors, lawyers, bankers and the like… So be asked to present is somewhat of an honour.

I asked ‘Gone Fishing’ editor Eddie Hamilton to come along as moral support and we spent a great deal of time outside the venue catching up – Eddie has been off the radar for some time and has just emerged from editing ‘Kick Ass’. I was dying to hear about his adventures, the premiere, meeting Brad Pitt and the likes, and I hope to film a podcast with him next week for us all to find out more about editing this years break out success (we all hope!).

OK. Back to the event…

To be honest, I was rather nervous as it was quite possible that I was the least successful person in the room (which was filled with about 50 people)! So I played sheepishly with my lunch, waiting for my cue to speak in-between the rather delicious grilled chicken main course, and the promise of a scrumptious lemon tart for dessert.

I needn’t have been concerned though as everyone was both engaging and complimentary. I spoke about my ‘Gone Fishing’ adventure and presented everyone with a DVD at the end – that’s one way to get the movie into the hands of the top bods of UK film! Let’s see if anyone emails me back with their thoughts. It’s so important to capitalise on these moments and to know that 50 or so top Brit film makers could be watching ‘Gone Fishing’ this weekend is very exciting.

Overall, a great event, and now I am an honorary member, I will be attending and networking every month!

Screw it, let’s do it! Top thirteen reasons why you should NOT wait to get your movie righ...
John Hughes: Top quotes for filmmakers, screenwriters and creatives who are young at heart
What can story tellers learn from Andy Murray?
Top Ten Quotes from Aaron Sorkin for Screenwriters
How to Turn Your Followers into Doers... How I did it in my Fantasy Epic by Kate Madison
What is the most important thing that a powerful storyteller MUST do?
Film Distribution In 2010, a Guerilla Film Workshop
Film Makers, keep your overhead low and rent a small office!

3 Responses to Lunch with the cream of the British Film Industry. Rather civilised really!