By Chris Jones on March 15, 2010 in Courses, Inspiration, Screenings 1

WARNING – This short is 18 Certificate and NOT FOR THE FEINT HEARTED (So mum, don't watch it!)

Tonight at Ealing Studios, we are hosting a SOLD OUT event with the makers of the zero budget horror film ‘Dead Wood’. You can read about the event on the blog here. I interviewed them for the new Guerilla Film Makers Pocketbook, and was so impressed with their story, I knew we had to run an event around it.

Part of their journey included making a short film which is above. What is amazing is the leap in quality from this short to the feature. Here’s what the boys had to say about this no-budget, grungy short shocker it in their interview in the book… (remember this short led onto a zero budget feature which was picked up by Lionsgate for North America) 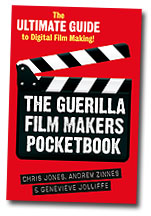 David – It’s a supernatural horror film that we made over a couple of years, shot on a micro budget.

Q – How did Dead Wood come about?

David – We are a three man team, myself David, Seb and Richard Stiles. The three of us had been working together on all sorts of media related jobs, from low budget music videos to corporate work. We had the idea of making a low budget horror after we saw an online competition to make a horror short. We thought we should just go and make it, which we did for £200 – we were runner up in the competition, but thought, why not expand that idea into a feature film? We had no money ourselves, we didn’t know anyone with money, so thought… let’s just do it with what we have available.

Seb – And at the time, we didn’t know anyone who made films aside from each other. The three of us just had this common dream of making a feature film.

David – We thought a feature would be like the short, only scaled up. It didn’t actually work out like that (laughs)!

Q – So how much did you spend?

Seb – The most expensive element was the petrol. I did crash the van too, so we had to pay that insurance expense.

David – Yes, to be clear, we did actually manage to raise ‘no money’ (laughs). We just wrote the script around what we had – a camper van, the woods… We didn’t want to shoot interiors as that means lots of art direction. In the woods, no matter where you point the camera, it looks good.

Seb – We had a crew of three. There was no-one else involved. We had two cameras which we owned, so usually two on camera and one on sound. We could also split up and shoot two scenes at the same time with different actors. We didn’t want to have other people involved as they would slow us down. There was never any discussion as there was no-one to get into a debate with. It was the same with funding – we had no money so we had no-one to answer to. We took as long as we wanted to do everything and get it right.

The Whole Interview appears in the new Guerilla Film Makers Pocketbook after the launch in Cannes!

One filmmakers journey… how we met at the Guerilla Masterclass and went on an extraordinar...
LA Screenings Video
Get a ton of filmmaking tips, tricks and articles every day
John Hughes: Top quotes for filmmakers, screenwriters and creatives who are young at heart
Well that happened...! Blood, guts and glory at Guerilla Film Masterclass
Top Tips For When Being Interviewed About Your Film
Three cheap tips for getting to the Cannes film festival from Nice airport
BAFTA nominated ‘Shifty’, a Guerilla Film Makers Script To Screen presentation with writer and director Eran Creevy

One Response to Watch 'Dead Wood' the short film, with short interview with the film makers