Wow! Well in the words of my co-host Judy Goldberg, ‘That happened!’

The first installment of ‘The Production Office’, our weekly film makers show, was broadcast from our office with only a few technical hitches. We had viewers from across the globe – UK, Ireland, Canada, USA, Australia, Spain, Mexico… making it a truly international event. 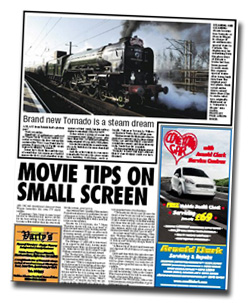 Feedback from the post show survey has been amazing, and we have also had loads of great ideas, criticisms and suggestions offered too. So thank you all. We will share some of the distilled ideas in due course, and hopefully, next weeks show will also include some of them.

The amazing news is that we came in at the number one slop in LiveStreams Film Show section. How cool is that!

Although I didn’t get first hand experience of it, for obvious reasons, apparently the live chat window was a hot bed for comment, connections, ideas and deals. There was a huge amount of email swapping, script swapping and Facebook connecting going on – as well as commenting on the show. We knew this live aspect of the show would be good fun, but its success is far greater than we had expected.

We even managed to get some press in my local newspaper, pretty good given this was our first show and frankly, we didn’t know for sure if it would even work! 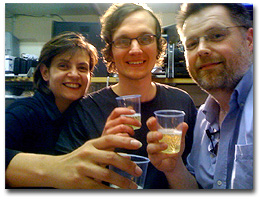 OK. So from me personally, a big thank you to everyone who got involved – guests and Maureen who helped run the show. But in particular Judy and James. Editor and now vision mixer James Barham worked like a trooper to deliver the show with technology that was held together using sticky tape and string, with software that is amazingly buggy, with me audio mixing without headphones (!) and without ever losing focus of his cool. James, you are the MAN! The pic above was taken just seconds after we went off air.

If you missed it live, the show is now ready for watching, ‘catch up TV style’. You can watch it here on the blog.

OK, here is some of the feedback from the show.

'I watched your live internet broadcast last night and I was gripped, honestly! It was FANTASTIC! Well done you! Once again you and your drive for success is  bloody inspirational!!!

I also started 'chatting', and being a technophobe, it’s something I've never done before and I found it really exciting!!! :o)  I got chatting to a producer who had a look at my website and is interested in me to act in his rom-com feature – which could be very cool. He's emailed me the script so I'm going to get reading!'
Amy Enticknap, Actress, Oxford

'Laughs!  Surprises!  Tension!  Drama!  This is definitely the future of Home Entertainment!  For a first show that was actually pretty slick, Chris.  Well done to you and your gang.  Look forward to show 2!'
Ryan Lee Driscoll, Producer and Director
SHINING LIGHT PRODUCTIONS, LONDON, UK

‘Great job on the show Chris! Was absolutely brilliant. Heaps of fun and unquestionably worth getting up at 4:30am for. I gotta say I didn't notice a single technical glitch, so that was great (and seeing you were worried about it, good to know it wasn't an issue at all), and yeah, the highlight for me was you talking about ‘Rocketboy’. Congratulations man, you've earned that tiny champagne ;D’
Marke Deere, Film Maker, Gympie, Eastern Australia

'So many shows feel they have to be quick and over before people get bored. This is already specialist programming. People are watching because they're interested in the subject and I found it refreshing that you took the time and presented a ton of good material.'
Dean Lines, Writer, Manchester

'Saw the first show & loved it-been a fan of your work for a long time & think this is a great idea for inspiring & advising all us filmakers out there-well done & long may you broadcast! I liked the fact it was broadcast on a specific date & time (even though watching it after is possible) as it made it feel like an event that I didn't want to miss out on – knowing you guys were live was very exciting!'
:o) Brendon Blackshaw, Editor, Watford

'I just enjoy watching Chris as he gives me real strength and belief in film as though he breaths it and that's what keeps him alive. A man after my own heart. (I'm not gay by the way I just think what Chris does has a real impact on our industry in this country and I've never known anybody like him to dedicate as much time as he does trying to help other people). This is show for film makers by film makers and represents everything that film is about. No side tracks, no BS just straight forward FILM, FILM, FIL
M. WATCH AND LEARN.'
Mark James Thomas, Actor/Writer/Director

'What a really sterling effort to communicate ideas amongst film makers. Well done. Interesting topics and the clips were a suprise as was the live 2 way with Gen in LA. We ate popcorn and watched and read the chat. Kevin went to sleep and started snoring. Kevin is a cat. Loved the "Don't you take out my eye with that champagne cork!" Priceless.
Nigel Sizer, Film maker.

'Yet another portal into the magical world of film-making courtesy of Chris Jones. Today's independent British film community is lucky to have these kinds of resources. Let's hope we soon start to see the dividends being paid in the industry.'
Jon Plant, Producer/Director

'I'm dyslexic Chris so ploughing through your great books is a real challenge for me so watching you knowledge and experience on a tv show is great! Thanks a million!'
Alex, Director, Devon

'Having tuned in several days late to watch the debut of the totally splendid Mr C's and my delicious daughter Judy's show I have to say I was mightily impressed.  The work of these wonderful and talented people is quite extraordinary.  Personally speaking I would probably find it easier to write a learned thesis on theoretical physics or take up teaching knitting as a foreign language because I wouldn't have the faintest idea about how and where to start on the knotty problems involved in the film making world. I know that Mr C's mum and me – Judy's mum – are proud beyond measure of what they do and the never ending work they both do – and I am certain sure that brilliant things will come to pass for them both in the not too distant future – maybe tomorrow, please God – who knows? Luck, luck and thrice luck in Cannes – it will surely come good'
Judy's Mum

WOW! Thanks everyone. Especially Judy's Mum!

Inspirational podcast with writer Peter Souter - great tips, advice and insight for writin...
Manifesting Success In Your Life and in Film Making... Time to re-consider your reality?