By Chris Jones on May 15, 2010 in Books, Guerilla Film Makers Handbooks, Guest Blog 1

I am about to depart for Cannes, but thought I would share with you some feedback for the books that I have just received. We have sold out of the new pocketbooks already, and right now, you can only get them in bookshops (if they have stock) and Amazon and other online retailers (while they have stock too). Reprints are on the way!

OK here we go… The first is from a young film maker in the US of A. Over to MJ… 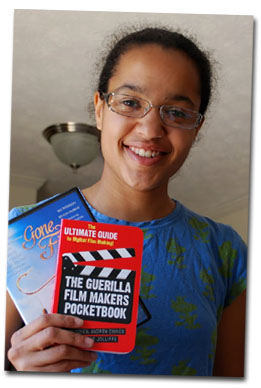 A Pocketful Of Inspiration – My review The Guerilla Filmmakers Pocketbook.  By MJ Slide, Thursday, May 13, 2010

I'll keep things simple. I'm 17 years old and an and Indie Filmmaker in the United States of America.

When one has the opportunity to stumble upon a book that is powerful enough to change the course of their entire life, people take notice. How can they not? Those seem like two very strange sentences to start out a review on a small six inch 320 page book but I couldn't think of anything more appropriate. The following paragraphs are as much a review of the new Guerilla Filmmakers Pocketbook (GFP), as they are a reflection of how books can drastically alter lives, mine to be more specific.

The Guerilla Filmmakers Pocketbook written by indie film masterminds, Chris Jones, Andrew Zinnes, and Genevieve Jolliffe is the offspring of their ever popular collection of film guides that include The Guerilla Filmmakers Handbook, (GFH) which happens to be the very first book on filmmaking I have ever bought.
I was 13 and highly impressionable. On a whim I asked for the massive Guerilla Filmmakers Handbook for my 14th birthday after seeing it on a shelf at my local Barnes & Noble. I silently thank my older brother every day for obliging my request. Long story short, I read the whole thing, all 714 pages of it. I couldn't get enough. The advice, case studies, and open intimate writing style fired up my mind. My dreams of becoming a filmmaker swiftly jumped from the simmering back burner to the main focus of my free time. I was inspired; the passion that Chris and Gen displayed on paper was unavoidably contagious. Basically what I'm saying is simply this; Chris Jones and Genevieve Jolliffe and The Guerilla Filmmakers Handbook are the reason I am, now at 17 years old, in the middle of pre-production for my senior project short film THE SAVING. I used to carry the GFH with me everywhere; it was my guide so when I read on twitter that Chris and Gen had teamed back up for a pocket version of their life changing volume, my nerdy grin spread from ear to ear. I had joined twitter about 3 months before that and it's all a bit of a blur now but somehow I found and followed Chris Jones's account (@livingspiritpix). For me, that was HUGE. My filmmaking hero was only Direct Message away! *still tries not to hyperventilate*

It was only a few weeks ago and I was systematically nerding out tweet style about how excited I was to purchase the Guerilla Filmmakers Pocketbook when as if like heaven itself had opened and DM'd me a message arrived in my inbox. It was from Mr. Jones and the summary was this "Hey, if you buy the book off my website, I'll sign it and you don't need to worry about shipping." from that point on Chris Jones' hero status was secured forever in my mind's eye. Of course I said yes and the book arrived in the mail, along with a copy of his Oscar short listed film GONE FISHING exactly a week ago. And in exactly a week I have read the whole thing cover to cover. Besides the fact that the book fits quite nicely in pocket of my jacket and doesn't cause my shoulder to ache, it wields the same amount of Oomph the larger version does. Take it from me. I would know.

From the opening page, signed by Chris, Gen, and Andrew the book envelopes all the bases of Digital Filmmaking in this digital age. I read each page hungrily, the advice is similar to GFH but updated for the current technological advances available to indie filmmakers. Each section is comprised of advice stuffed interviews from individuals active in the indie film scene with a sidebar breakdown of the sections main points to reread on the fly. From Gen's guide to writing with your budget in mind (DO IT, it'll save you loads of time and heartache), camera guru Phillip Bloom's (@PhillipBloom) lowdown to shooting on DSLR to Sheri Candler's (@shericandler) highlights to promoting yourself and your film through social networking and the like (yes getting a twitter is totally worth it.) it's all there. Covering the span that starts with that good idea for a killer film that pops into your head while your staring off into space when you should be concentrating on homework *cough cough* all the way through post production editing and the festival circuit.

The Guerilla Filmmakers Pocketbook is the ultimate crash course, the Ultimate Guide to Digital Filmmaking, and I recommend it to everyone. BUY THE BLODDY BOOK, YOU WILL NOT REGRET IT. No matter if your just getting your start or are a veteran of the industry, the Guerilla Filmmakers Pocketbook can serve as a foundation for your film knowledge or a great refresher course.
So there it is. Thank you Chris for acting as my inspiration and co-writing the book that drove me to the art of filmmaking. I'm entirely indebted to you.

Posted by Mahogany J. Slide at 2:07 PM (original post on her blog here).

WOW! I also got this feedback about my other book, The Guerilla Film Makers Movie Blueprint, via Facebook. 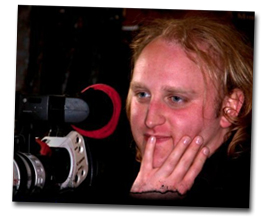 Hey Chris. I just wanted to say a massive thank you to you for writing 'The Guerilla Film Makers Movie Blueprint'. It has been a great influence for me whilst making my debut film. Actually if you had never written it I probably would never have picked up a camera and gone out and made a film. You are truly a God amongst us young filmmakers. I'm not writing this to get a reply, I just wanted you to know how special and appreciated you are. Thank you for accepting my friend request and I look forward to every book you write and every film you make.
Kind regards, Pete

Blimey! Thank you both Pete and MJ. It’s really awesome to know that all our hard work has created amazing possibilities for you both. Do keep us in the loop with all your successes,  and thanks for sharing with us all.

You can get both books on Amazon – The Pocketbook here, and the Movie Blueprint here. There are also lots of independent reviews there too.

Demystifying Distribution: Real World New Distro Case Study Strategy and Tactics
Get a ton of filmmaking tips, tricks and articles every day
It’s only fitting that it’s American Independence Day
What are the five main outcomes for filmmakers attending the Guerilla Filmmakers Mastercla...
Welcome to MY 'Guerilla Film Makers Handbook'.... circa 1989! The making of 'The Evil Dead...
Guerilla Film Makers Pocket Book Launch A Success, and SUS Tops The Box Office Thanks To YOUR SUPPORT!
You Know You Are In Trouble When You Look Forward To Going To Cannes To Get A Rest…

One Response to A Pocketful Of Inspiration…