By Chris Jones on May 10, 2010 in Feedback, Guerilla Film Makers Handbooks 0 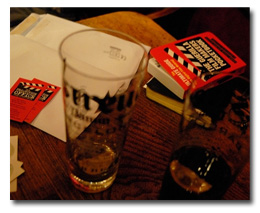 I can’t confirm it right now as I am not currently in my office, but I believe we are sold out of ALL 200 signed copies of The Guerilla Film Makers Pocketbook. It’s no surprise really as we actually sold nearly 100 at the book launch last week. You can see our shenanigans in the video above which was shot by multi talented Oli Lewington.

Reviews of the book are now starting to appear, such as here on Amazon UK (where you can also buy the book for just £8!)

If you missed it, there is a chunk of the book to download here, featuring editor Eddie Hamilton. Continuum (our publishers) also made the first 50 pages available here too. So you really can get a sense of the MASSIVE amount of film makers information in the book, and you can pack all of that comfortably into your back pocket. It really does fit. We promise! 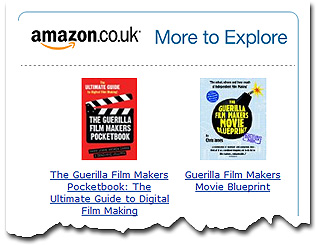 Over the weekend, I was rather amused to get an email from Amazon recommending that I buy the new pocketbook, as well as the ‘absolute step by step guide to making your first feature film’ book that I also wrote, the Guerilla Film Makers Movie Blueprint (check out reviews on Amazon here).

Back to the book launch. On the evening, I was particularly excited as my old pal, Mark Sutherland, production designer, producer, kitchen builder and roofer, was able to attend and share his experiences on his first feature film ‘SUS’, released in UK cinemas this weekend. I was also delighted to hear that because of our BIG push at the launch, the film was so successful in central London that it was held over for a second week. AWESOME! WHAT A RESULT! So thank you if you went to see it, and if you didn’t, GO THIS WEEKEND and take two friends! It’s called SUS and their website is here.

I am sure you will agree from the video, Mark is a passionate and inspirational speaker, and we have just confirmed that he will be in the ‘Production Office’ with us on Thursday night for the LIVE show, to tell us all about how me got this microbudget feature into UK cinemas. So remember to tune in for fun and games, and all LIVE from ‘The Production Office’.

Also, photographer Paul Treacy took some GREAT photos – you can see them all here.

And if you are interested in seeing the 3D footage that was shot at the launch party by Steve Allen, you can watch it on Vimeo here. 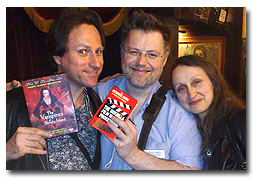 Just got to tell you what a great time we had at the Guerilla Film Makers Pocket Book launch on Thursday night. Honestly, the most fun we've had in a dark, over-priced, Soho cellar that we can ever talk about in public!

What a fascinating group of people were crammed in to that tiny space, from the idly curious, to people planning their first shoot, to people such as ourselves who have been there, done that and got the crew T-shirt!

We came out of it with a huge pile of business cards, contacts and email addresses from the hoi-pilloi of indie film makers, renewed acquaintences with people we hadn't seen for years, met for the first time people we've been emailing and facebooking for ages, and even sold several DVDs of 'The Vampires of Bloody Island' – something we didn't expect to do, as micro-budget film makers are notorious for not actually ever buying anything!

I was filming the next day, so I took the pocket book on set with me. It's true, it does actually fit in the pocket (even squashed between the days call sheet and a few pages of the script!). I didn't get to read any of it though as the book ended up doing the rounds with everyone wanting to have a look. I politely told them all to get lost and buy their own copy! The book is so well designed for just flicking through and getting nuggets of inspiration and ideas in any spare five minute break in filming. Another jewel in your crown Mr Jones. The only thing wrong with it is that our own film isn't in it! But then I guess it wouldn't quite fit in the pocket anymore!  All the very best,

Exclusive Interview with Christopher Nolan and Emma Thomas from our Guerilla Film Makers A...
Catherine Hardwicke Genesis: How she wrote and directed her first film that led to 'Twilig...
Why we should all be embracing smaller film budgets and innovating
Get a job in Hollywood... detailed insight into the dream factory
Welcome to MY 'Guerilla Film Makers Handbook'.... circa 1989! The making of 'The Evil Dead...
Has The Guerilla Filmmakers Handbook helped you make YOUR film? I want to hear from you...
Sell your props and fund your film!
A Pocketful Of Inspiration…